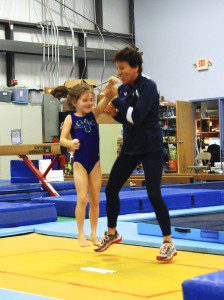 Trampoline expert Joy Umenhofer assists a gymnast on the trampoline at Roots Gymnastics in 2014.

WESTFIELD – The 2021 Summer Olympics in Tokyo are underway. While most viewers are well-schooled on some better-known sports that are played professionally like basketball, baseball, golf, and soccer, we thought it would be helpful to talk to some local athletes and sports minds about some of the other more obscure sports that are quite simply hidden gems.
Take, for instance, trampoline gymnastics.
While many people are familiar with backyard trampolines or trampoline parks that have cropped up all over the country, there is a more specialized version that features elite talent from all over the world.
“Kids love to bounce and fly through the air,” said Roots Gymnastics owner/team director Steve Pryor. “At the Olympics, you are going to see the most elite (athletes) who can do this.”
According to Pryor, Olympic trampoline gymnasts typically start with a certain talent level in the sport. They have a great body awareness and air sense. With a very specific combination of training, they are able to hone those abilities to a high level of professionalism.
Pryor said anyone watching the Olympics competition on TV (July 30-31) will likely see some skilled athletes perform more difficult routines with less precision, while others with better form will tackle less difficult routines.
“The ultimate winner is going to have a combination of those things — the highest level of skills with complete mastery over form and execution,” Pryor said. “If someone happens to stumble upon this Olympic competition on TV, they are going to stay tuned because … it is just so outstanding.”
Pryor did offer a word of warning to area kids — do not to try this at home, because unlike backyard trampolines, trampolines at the Olympics are highly specialized pieces of equipment designed and engineered for extreme height.

ON TRACK WITH A FORMER BOMBER: A slightly more ballyhooed Olympic sport, track and field, has the attention of one local track star, Gabe Piepergerdes. Piepergerdes, a two-time Central-West pentathlon champion (2016, ’17) from Westfield High School, just recently wrapped up his collegiate career as the school record holder in the 400 meter hurdles at Holy Cross with a career best of 51.89 seconds. 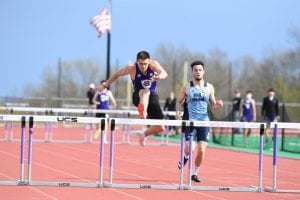 Piepergerdes was the first Holy Cross men’s track and field athlete to qualify for the NCAA East Preliminary Round of the NCAA Championships since 2007. With one year of eligibility remaining, he is transferring to the University of Michigan to compete for the Wolverines.
“What separates the best from the best in the 400 meter hurdles is it’s two races in one,” Piepergerdes said. “There’s the 400 meter dash side of it — so you sprint — plus the hurdles is a completely different skill set. People like (U.S. Olympian) Rai Benjamin and (Norwegian) Karsten Warholm both have that 400 meter speed and their hurdle technique and form is uniquely flawless. They are flying through the hurdles.”
With staggered starting blocks, Piepergerdes said the average viewer needs to focus on the first competitor going over the hurdles because that male or female track athlete is in the lead. In the back stretch, he said, the fastest athletes are typically seeded in the middle lanes to “make it more competitive.”
Several of the top tier 400m hurdlers who qualify for the Olympics are college athletes who perform on a professional level.
Other track stars to keep an eye on, according to Piepergerdes, include: Sydney McLaughlin, an American hurdler and sprinter from the University of Kentucky who turned pro and is the current world record holder in the women’s 400 meter hurdles; LSU’s JuVaughn Harrison, who won both the high jump and long jump at the 2021 NCAA Indoor Athletics Championships; and, American Gabby Thomas, the second-fastest woman of all-time in the 200 meters. 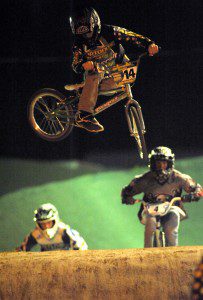 A racer catches air at the Whip City BMX track located at the Westfield Fairgrounds. (THE WESTFIELD NEWS FILE PHOTO)

So what should the average viewer look for?
Unlike motocross, where riders race on motorcycles, BMX racers compete on bicycles.
BMX Freestyle riders are judged on the quality of their two-minute runs based on difficulty, style, and originality as they perform tricks on box jumps, ramps, spines, and walls throughout the park.
“BMX riding is a combination of speed and dexterity,” said Whip City BMX track director/operator Al Pighetti. Whip City BMX, which opened in the early 1980s and now operates at the Westfield Fairgrounds on Russellville Road, is home to nearly 150 area riders. Their race season runs from early May through mid-October.
So, what separates the best from the best?
“It’s the desire, the heart,” Pighetti said. “Some kids are fast but maybe they don’t have the same drive as someone less talented. It’s just the drive of the individual.”
Although the annual Olympic Day at Whip City BMX was canceled this year due to the pandemic, traditional Whip City BMX racing will once again return to the Westfield Fair on Sunday, Aug. 18, at noon. Until then, fans can sink their teeth into the Olympics competition in Tokyo and, of course, weekly races in Westfield.