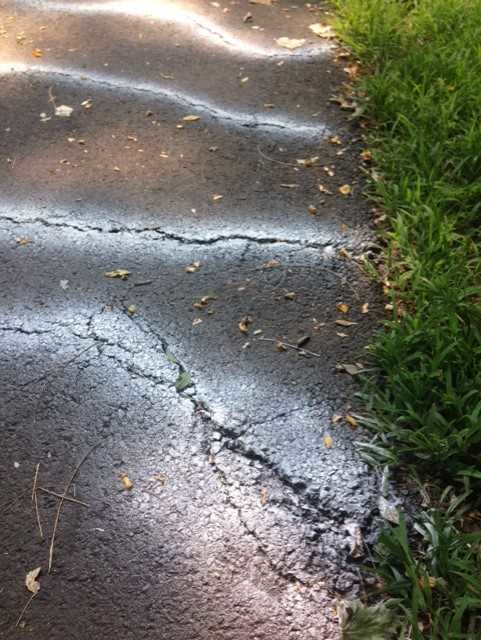 SOUTHWICK – The Park and Recreation Committee is making progress on their application for the Massachusetts Trails Grant.

Through the Executive Office of Energy and Environmental Affairs, the Department of Conservation and Recreation, and the Department of Transportation, the Massachusetts Trail Grant is an inter-agency initiative that gives communities resources, guidance, and matching grants. The Mass Trails Grant allows communities to design, create, and maintain trails. The grants usually range from $10,000 to $100,000, while some projects could receive grants up to $300,000. The grants can be used for project development, design, engineering, permitting, construction, and maintenance. 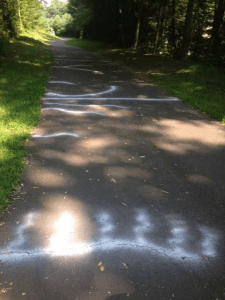 The roots that are sticking out on the trail have been spray painted in order to be identified. (Photo from Cara Cartello)

One of the requests is to repair the damage from the roots that are popping out of the pavement on the rail trail. Reed-Waldron added that roots are coming from a locust tree.

“They’ve impeded the trail, which has caused the trail to lift up,” said Reed-Waldron.

The request in the application includes having the Locust trees removed by a tree company as well as the clean-up process and having the areas with the roots paved over.

Another request is to add more signs throughout the rail trail where some areas on the rail trail have been deemed dangerous by pedestrians and drivers going by the trail. This issue is especially evident near the Depot St. and Feeding Hills Rd. section of the trail. Reed-Waldron noted that the Park and Recreation Committee wants the signs to say “Stop Ahead” and have solar lights that cause the signs to light up. Curve signs are also being requested so people using the trail will know when a curve is coming up.

The deadline for the application to the Mass Trail Grant program is on Friday. Reed-Waldron said that if their application is approved by the state, they won’t be notified until June. With grant amounts up to  $300,000, it’s an opportunity that the committee doesn’t want to miss out on.

“Why not try to ask for funds if they’re available?” said Reed-Waldron.