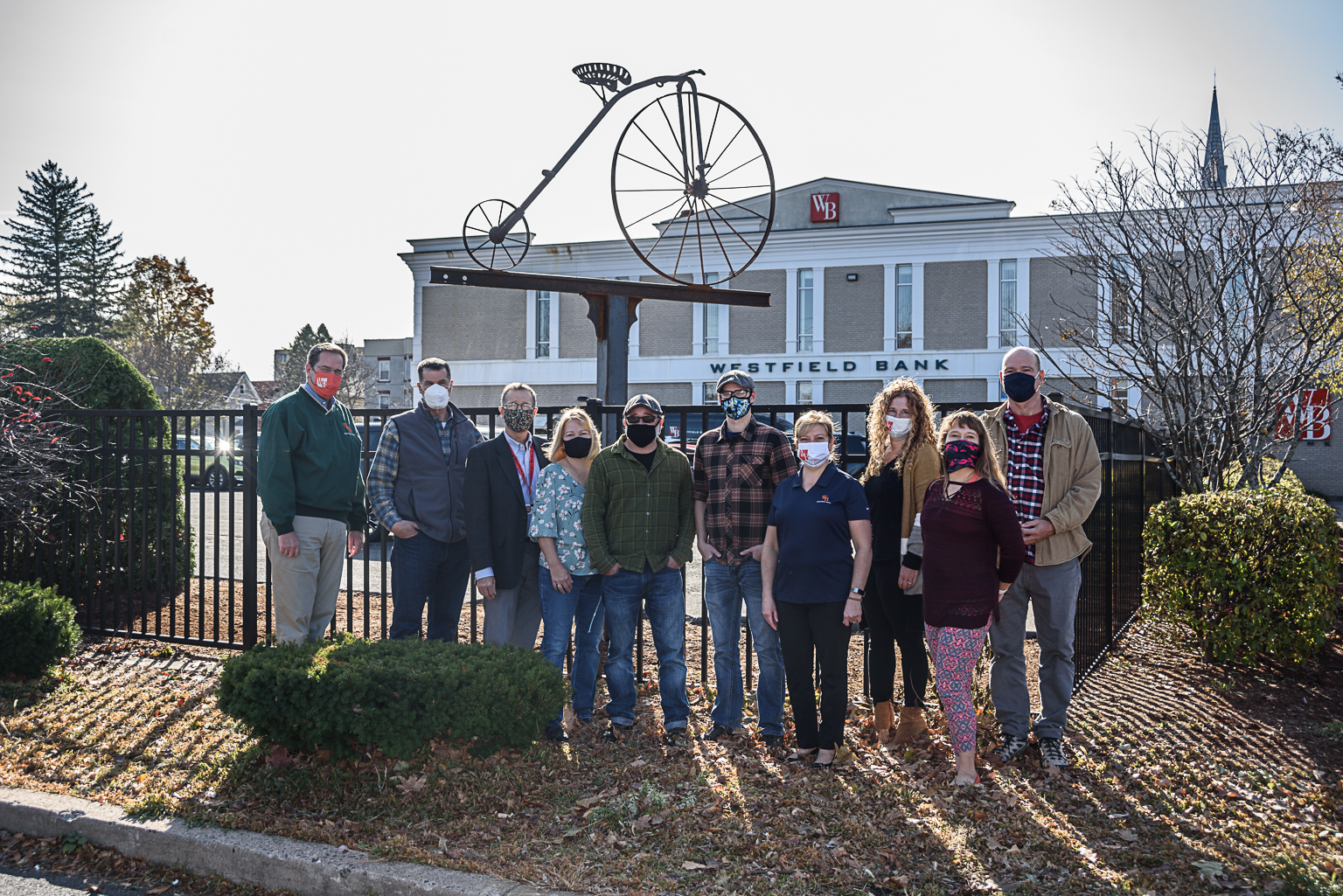 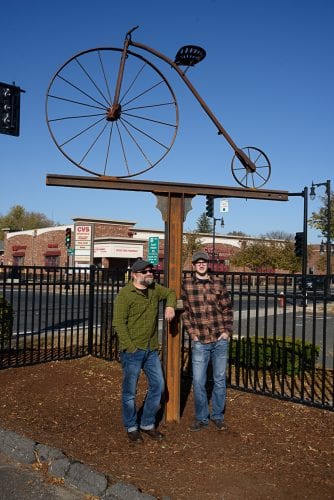 WESTFIELD – After two years of planning and dreaming, city officials, business leaders and representatives of the arts community came together Friday morning to celebrate the installation of two unique bicycle sculptures downtown.

The High Wheeled Penny Farthing bicycle sculptures, created by Westfield artist Sebastian Glebocki and his son Conner Glebocki out of recycled parts, are now installed at the Westfield Bank on Elm Street and at City Hall.

“I go material hunting with my son at old mills and farms and find stuff that’s been kicking around for 100 years or so,” Glebocki said, adding that the sculptures bring new life to the old tractor seats and discarded machinery parts that he finds. He said his son Conner not only helps him find the parts and create the sculptures, he’s the inspiration behind them.

Glebocki also created the giant metal pumpkin that was first displayed at PumpkinFest in 2018. It was during that process that members of ArtWorks began talking to Glebocki about making his dream of having the bicycles displayed along the Columbia Greenway Rail Trail and throughout the city as signature sculptures.

ArtWorks treasurer Cheryl Crowe and member Lucille Nason started working to secure the funding for the bicycles. Nason spoke to Kevin O’Connor, executive vice president of the Westfield Bank, who agreed to pay $2,500 for one of the sculptures and to locate it at the bank.

“We love the sculpture that’s out there; we’re impressed by the work that Sebastian did in making it, and we’re certainly very fortunate to have ArtWorks behind this,” said O’Connor at the grand reveal on Friday. 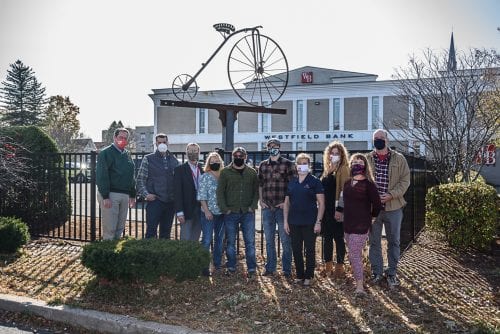 “It really makes you feel good about the collective efforts in having a group like ArtWorks, the support of the Department of Public Works, the artist, and private business, and how great it is to have all these pull together. The placement will really work out well once the Rail Trail is fully open, and people coming off the path will be able to view it from that side directly,” O’Connor added.

“It’s extraordinarily exciting for us, for the whole team. We’re over the moon for this project and what it’s doing for Westfield in terms of cultural attractions and community partnerships. The Westfield Bank is all about community, and we were founded on community, so it’s a hand-in-glove awesome experience,” said ArtWorks President Bill Westerlind.

In addition to securing the participation from the bank, Crowe and Nason hosted an online gofundme site to raise the funds from the community for the second bike to place at City Hall. They also worked closely with DPW Interim Director Francis Cain to find a suitable location for it. “Thanks to the people of the community that helped pay for the second bike,” Crowe said.

“They approached us because they needed help and wanted to have them installed. We said absolutely, we’ll help you with whatever you need,” Cain said. He also came up with the idea of using a piece of old railroad track found at the Sackett St. shop as a mount. The DPW excavated the site, poured the concrete, had the mount fabricated, and installed the plaque, purchased by ArtWorks for the sculptures.

“It’s a good feeling to do something for the community,” Cain said, adding that it was a rewarding project for everyone involved.

“As soon as they asked me I said yes. I thought it was a great thing to draw attention to our city as an art city. We have a lot of artists here,” said Mayor Donald F. Humason Jr. “You couldn’t have a nicer place to display for all the city to see, right at the parking lot,” he added, saying the spot was chosen by Tommy Curran, head of maintenance at City Hall.

Humason said the sculpture also ties in great with Westfield’s history as an industrial city, and a bicycle city with Columbia Manufacturing and its predecessor Pope Manufacturing, in the late 1800s. Humason also likes that it’s a green activity, recycling and reusing old parts. “They look great,” he said.

Westerlind said they are hoping to install a third Penny Farthing bicycle sculpture at the Women’s Temperance Park once the central section of the Rail Trail is completed. Crowe is working with the Engineering Department now to identify a site.

“The bikes are going to be part of attracting people to Westfield. Right now people are driving up from Connecticut to see the Heroes are Everywhere mural, and anecdotal evidence says people are driving up to see the bike at the bank. They will stop at all these cultural installations in the city. It’s for the long-term good for the city and everyone involved,” Westerlind said.