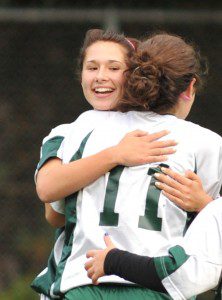 WESTFIELD – A pair of St. Mary High School girls’ soccer players have formed an unlikely bond, and it is beginning to pay big dividends for the small private Catholic school.
St. Mary freshman Monika Peterson scored on a pass from senior Darby Bailey for the game-winner in the 72nd minute against Franklin Tech Monday at Westfield Middle School North as the dynamic duo connected on a scoring play for the umpteenth time this season. The Saints won 1-0.
A halo has surrounded the two players all season.
At least one of the two players has scored in nearly every game this season. And when it is either Bailey or Peterson, the other one is usually on the other end of the play.
“We work really good together,” said Peterson, who drilled Bailey’s pass past the goalie as fatigue settled in between both teams late.
Bailey, who had a shot sail wide on a Peterson pass earlier in the first half, dribbled the ball down the sideline and set up her freshman teammate with a perfect pass late.
“We feed off each other a lot,” said Bailey.
The two players drew a lot of attention from Franklin Tech, but as Peterson showed, tiptoeing around three defenders with some nifty footwork near the sideline to set up Aisling Smith for a shot early in the second half, they would not be denied.
A borderline “offsides” call late prevented Peterson from a potential breakaway insurance goal.
While St. Mary dominated play in the first half, Franklin Tech made an offensive surge late. But the Saints’ goaltending prevailed, making some key stops.
St. Mary’s Francesca Debregdo and Alex Mitchell shared duties in net, finishing with a total of eight saves.
“We just couldn’t make the through ball,” said St. Mary coach Joe Almeida, who felt his team pulled out a huge victory against a 7-2-1 team despite a less-than-perfect outing. “But when we really need it, they’re there.”
It has been a whirlwind last several days for St. Mary. The Saints (5-4), who won a 3-2 thriller over Ware on Thursday on Peterson’s game-winner off a rebound, lost a heartbreaker to Renaissance, 2-1, Friday night despite an energetic effort from Bailey.

FIELD HOCKEY
Southwick 7, Holyoke 0
White and Petit scored two goals apiece, and Corey, Willis, and Rogers had one each in Southwick’s rout. Gold, Petit, and Lamoureaux had the assists.
Bodzinski (4 saves) earned the shutout in net for the Rams.