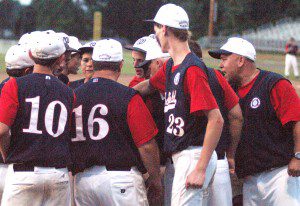 WESTFIELD – The Pittsfield Babe Ruth 14-Year-Old All-Stars pulled off an improbable victory, rallying for seven runs in the bottom of the seventh inning to eliminate Westfield in stunning fashion 14-13 in a state tournament game at Bullens Field last night.
Westfield, which exploded for five runs in the first inning, led 9-7 after four innings and tacked on four more runs in the top of the final frame to take a 13-7 lead.
Pittsfield managed three run-scoring singles, a two-run double, and scored on two passed balls in the epic seventh.
The game also featured what many Westfield coaches, players, and fans – nearly all of the Whip City faithful in atttendance – claimed to have been a blown call, when umpires ruled a Pittsfield ground rule double a home run.