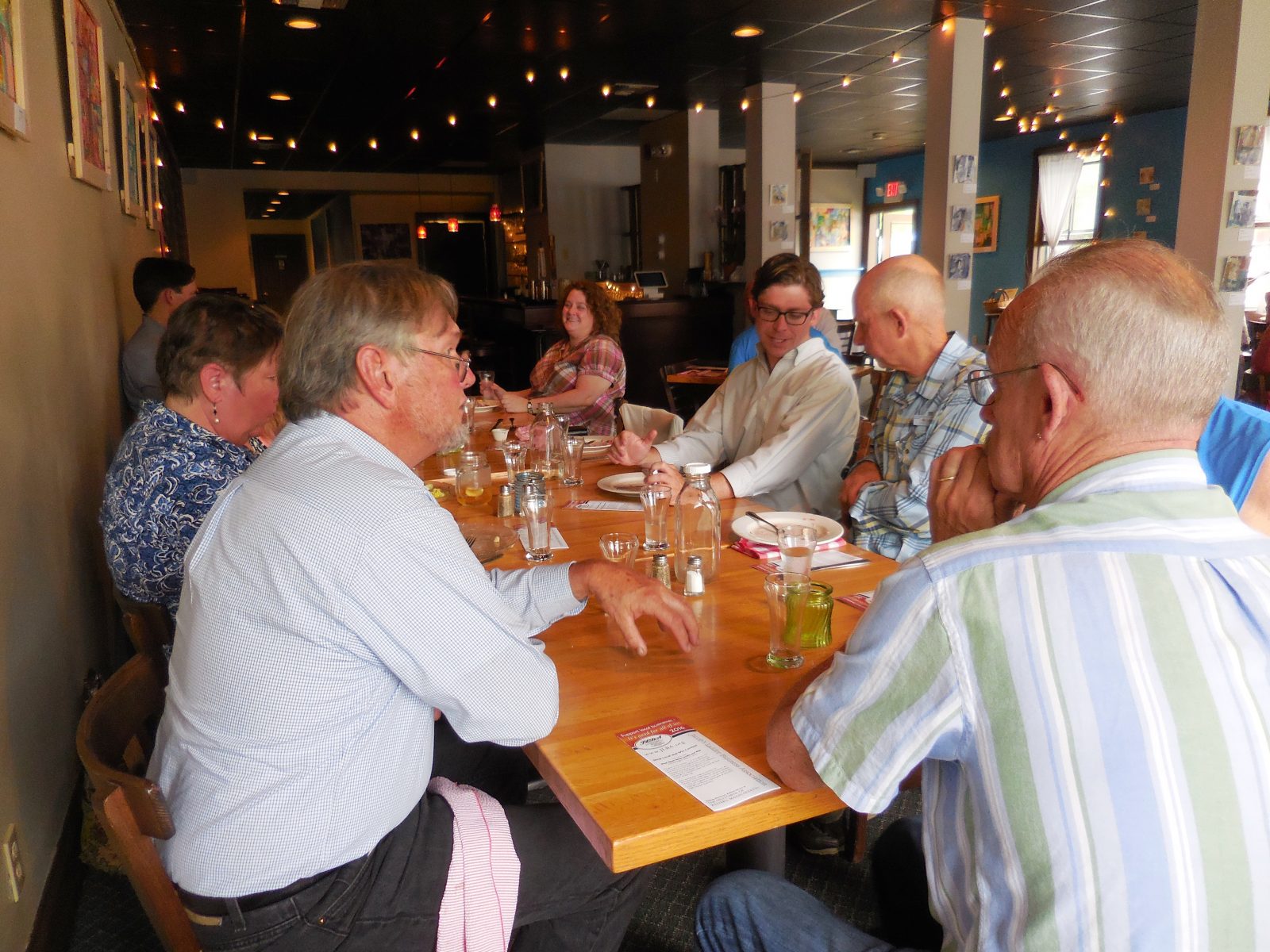 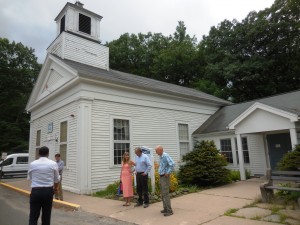 Last stop was Montgomery Town center, before returning to Stanton Hall in Huntington, after a day of driving. (Photo by Amy Porter)

Planning Commission (PVPC) joined Gateway Hilltown representatives Thursday to move forward on the Community Compact agreements that were signed by the towns in May.
Each of the six towns has pledged to work together to explore sharing services and to bring economic revitalization to the area. Toward that end, the town governments have assigned two members of their Select Boards to the newly named Hilltown Collaborative effort.
MassDevelopment has been tasked to administer a $40,000 grant to the Hilltown Collaborative for the economic development piece, and will work with Elan, out of Saratoga Springs. PVPC will be the administrative liaison and provide technical assistance to help the towns explore shared services.
On Thursday, following a welcome and introduction at Stanton Hall in Huntington, the group of fifteen boarded a fifteen-passenger van driven by Huntington Selectman John McVeigh to tour the towns, as representatives from each told its history, and shared landmarks and current struggles. Some of the recurring themes included declining and aging populations, lack of broadband access, and challenges to business development.
Driving down Historic Route 20, the group was informed about the Westfield River Whitewater Races, the oldest continuing whitewater race in the country, and the importance of the river to the community.
Derrick Mason of Russell spoke about the former thriving paper mill businesses in the town as the van drove past Texon, the last of the mills to close. He brought the group down Main Street past the town offices, to Hull Forest Products. Hull had previously attempted to put a biomass plant on the site, and now owns 10,000 acres regionally which it logs for export, sorting by species and size.
Mason talked about Horace Moses, the former principal of what became Strathmore Paper Company, who donated the Town Hall and free electricity to the town, and also the Boy Scout Camp and Strathmore Park. Moses also founded Junior Achievement, Mason said.
The tour took the group through Woronoco Village, once a thriving milltown with its own residents, and past Mill #1, now abandoned, and its falls. Visitors remarked on the beautiful site and potential of the area. 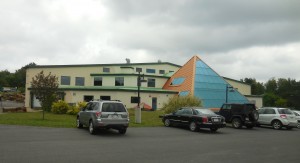 Hilltown Collaborative member Andy Myers of Harvest Moon Realty in Chester said one of the challenges in the towns is the lack of planning departments, an area in which he hopes they might collaborate.
Chuck Benson of the Historical Society took over in Blandford, noting the recent struggle of town residents in bringing high speed internet to the town. Blandford joined the WiredWest Initiative, recognizing its importance in attracting new residents and businesses.
Benson also said a turnpike exit in Blandford would greatly enhance access to the town, another effort widely supported by residents.
The group also drove past the Blandford Ski area, which will be celebrating its 75th anniversary this year, and disembarked at the White Church of Blandford, now owned by the Historical Society, which showcases the Bel Canto Opera every summer. The former church, built in 1822, is also a beautiful setting for weddings, which the Elan planners noted could be fully booked instead of holding 2 or 3 a year. The historic Blandford Fairgrounds were also visited.
In Chester, Myers spoke about the history of what was once known as the Chester Factory Village, and its former prominence as a railroad community. He said Amtrak trains now come through once a day, with no stops. The lack of any public transportation in the Hilltowns was another recurring theme during the day. 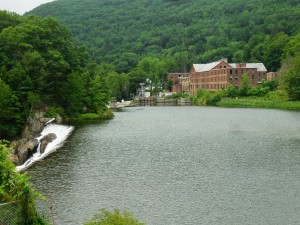 The tour of the hilltowns included a drive through Woronoco Village and the abandoned Mill #1 and its falls. (Photo by Amy Porter)

Myers said the former elementary school on Route 20 is now owned by New York City costume designer William Ivy Long, who stores his costumes there. Across the street is the Chester Theater and Haley House, which houses the theater troupe during its summer production season.
After stopping for lunch at The Common Table, Chester’s newest farm to table restaurant located across from the Chester Railway Museum, the group drove through Chester past the new Chester Elementary School, stopping at the Keystone Arch Trail for a short hike to the double arch bridge.
Select Board chair Alan Vint took over the discussion in Middlefield, the smallest of the Gateway towns, with a population around 500. Driving past the town center and a fully stocked highway department, they turned around at AzureGreen, a local business employing 20 that sells metaphysical items to the wiccan, pagan and magical communities, according to its website.
The van then drove down Skyline Trail, past blueberry farms that are getting ready to pick, through Huntington and up Montgomery Road to its historic town center. It was noted that life in the hilltowns involves a lot of driving.
The van then returned to Huntington, passing the Huntington Country store, the Gateway Regional school complex, Littleville Dam, and back to Stanton Hall, where McVeigh was given a round of applause for his service as driver to the tour.
Elizabeth Murphy, vice president of MassDevelopment’s Western Mass regional office in Springfield thanked the group for the informative tour. She said that her legal department is in the process of drawing up a memorandum of understanding for the grant to work on economic development for the area.
Lisa Nagle, principal of Elan, spoke about the next steps in the process, the first of which will be a community-wide open house in September, to get input from residents and stakeholders in the towns.
Myers questioned the purpose of the open house, noting that community members have been meeting for several years and discussing the issues, and admitting he was anxious to get started on economic revitalization.
Murphy said there has to be a buy-in from everybody. Nagle said new ideas may also come as a result of the feedback. She also said that her group had taken six pages of notes during the tour, and will bring back ideas and specific questions to propose at the open house.
Following meetings with the community and stakeholders, Elan will draft an economic development strategy, to be showcased at a second open house in November, and finalized in December.
“In my view, we need to market our area so it’s attractive, and businesses will come, and people will want to invest in our towns,” Myers said.