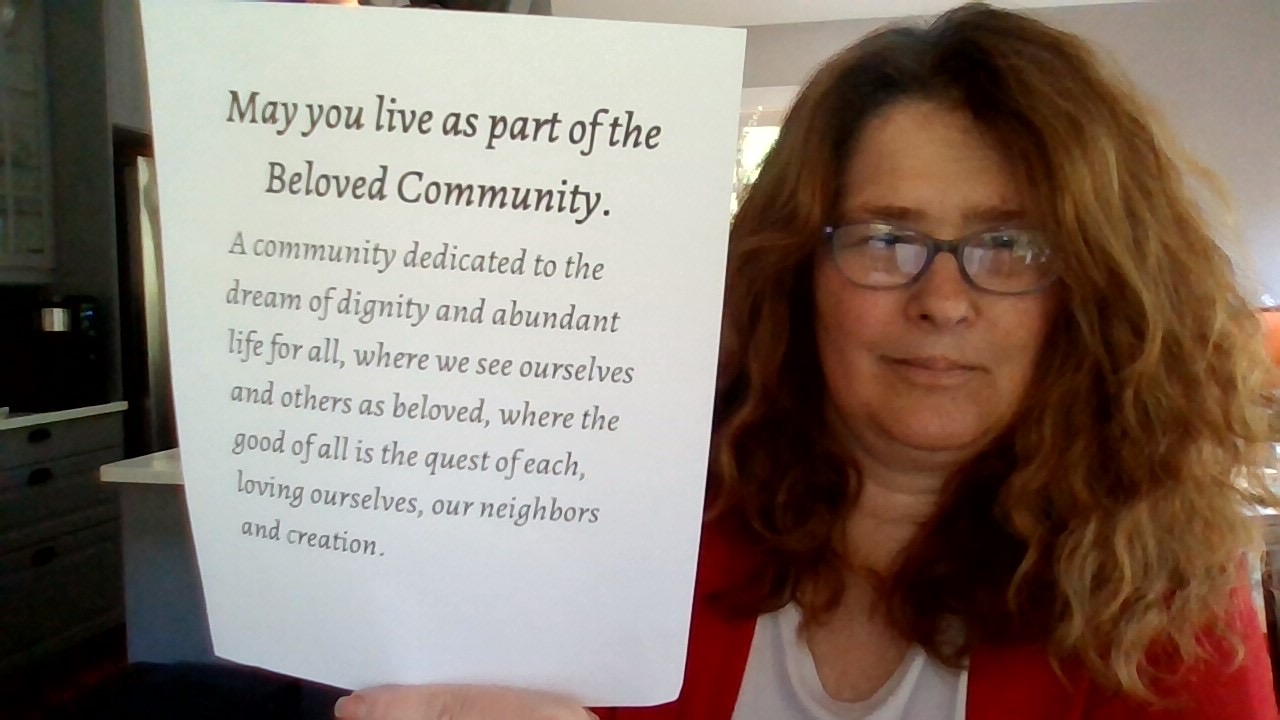 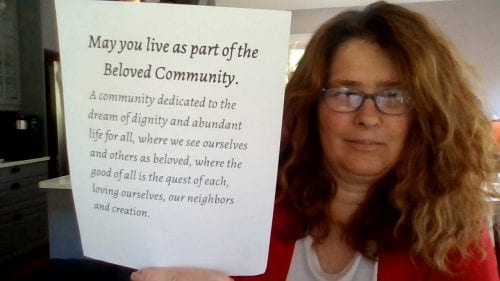 Kim Savery, Director of Hilltown Social Services in Huntington, holds one of the prayers included in the video released July 20. (SUBMITTED PHOTO)

When the 4th Annual Hilltown Interfaith Domestic Violence Vigil was cancelled due to COVID in May, members of the Interfaith Initiative asked community members to create prayer flags at home that answer the question “What is your hope, wish or prayer for victims and survivors of domestic and sexual violence?” The group then collected photos of the 57 flags that were submitted and created a short video that was released broadly on July 20.

“During this pandemic when we are isolating from in person gatherings to curb the virus, we felt called to continue to bring people together for our annual prayer flag project but now in a new way. This year, we went virtual with the messages of hope and compassion. Coming together virtually was a way to share strength and hope and well-being with each other and to be able to speak to those who are longing to hear that they are not alone especially during this challenging time when isolating can exacerbate situations of abuse,” said The Rev. Carol B. Smith of the First Congregational Church of Huntington, who heads the annual vigil.

The Hilltown Domestic Violence Interfaith Initiative was founded in 2015 when local advocates reported that more than half the victims and survivors they work with draw on their faith to live with or leave abuse. The Initiative is a joint effort of local faith leaders and Task Force members.

The group conducts outreach, holds vigils, provides training, and writes about faith and domestic violence in local papers. At last year’s annual vigil, a group of nine faith leaders led the event with these words: “Abuse is not just an assault on the body and mind. It is an assault on the spirit and soul.”

“The goal of this project is to combat the isolation and constant criticism and/or gas lighting that victims and survivors frequently experience. Isolation is a calculated and planned strategy frequently used by people who abuse. They cut their partner off from outside relationships or weaken these relationships, and then they tear their partner down in order to destroy their self confidence – or they use gas lighting strategies so their partner starts to question themselves or question reality, or even to blame themselves for what is happening. Few people can withstand this constant onslaught of criticism and manipulation if they lose connection with positive outside relationships. That is why isolation is so effective,” explained Monica Moran, manager of the Domestic Violence Prevention Projects of the Pioneer Valley Planning Commission.

The video may be found at https://www.youtube.com/watch?v=HjLTwm1yVaQ . To learn more about the Initiative community members can email the Task Force at [email protected] or visit the Southern Hilltown Domestic Violence Task Force on Facebook.

“The more ways we can share this video the better. We are hoping this virtual prayer flag project will encourage some to become allies and advocates, as well as to be a source of strength and hope for those who are abused and encouragement for those who are finding their own voice on their journey towards healing and wholeness,” Rev. Smith said.