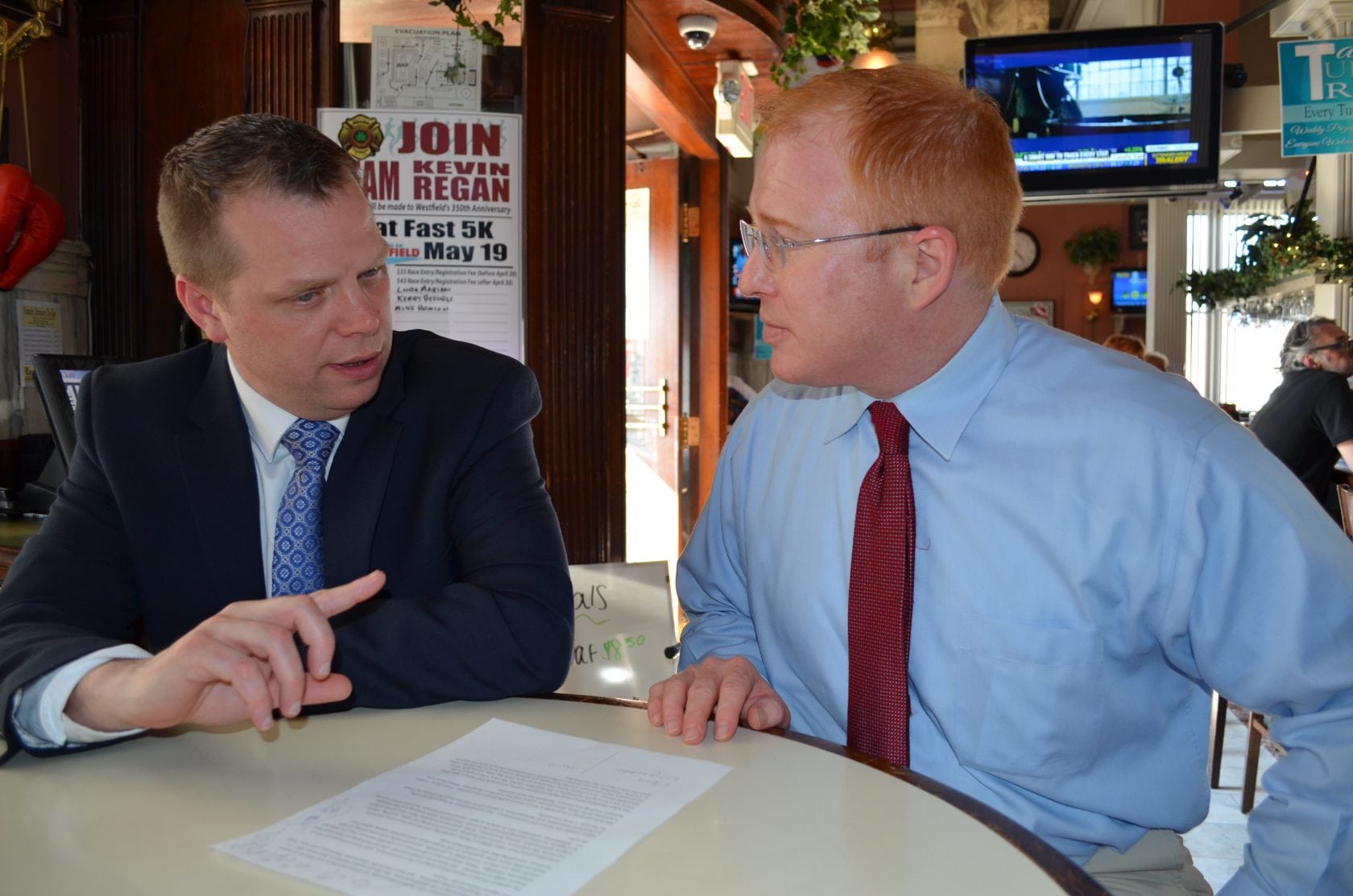 WESTFIELD-What started as a networking conversation among peers has blossomed into a unique gathering monthly for local professionals.

Westfield Networking Night is conducted on the third Wednesday of every month from 5:30 to 7:30 p.m. at The Tavern Restaurant at 2 Broad St. The event is free and light appetizers are served. 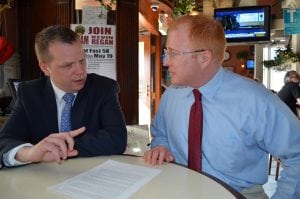 Daniel M. McKellick and John S. Mayock III discuss plans for the May 16 gathering of Westfield Networking Night at The Tavern Restaurant in Westfield.

“After several discussions with local professionals, all noted that there was little bit of a void in business networking in the Westfield area,” said McKellick. “Our general theme is casual networking in a fun environment, with local professionals from a diverse range of industries.” Mckellick added that the group started meeting in late 2016 and gatherings have taken place at the Westwood Restaurant and Shortstop Bar & Grill.

“We now make our regular home at The Tavern,” he said.

McKellick encourages professionals to drop in at one of the social gatherings to make connections with businesspeople, promote a product or service, or discuss current promotions.

John S. Mayock III of Springfield, a registered representative with One Boston Financial Group, has been among the networking professionals who are eager to introduce newcomers to those attending the Westfield Networking Night.

Both Mayock and McKellick met through a networking event several years ago and because of introductions that were made among peers, the two benefited from a business alliance.

“We have become friends because we have a lot in common in business but also we are both fathers of children about the same age and we have some common hobbies and interests,” said Mayock. “Often we meet others at these events and establish a business relationship. Then once trust and common ground are established a friendship naturally develops.”

“Attendees vary in tenure in their respective profession, from the brand new to decades,” said McKellick.

The gatherings are different each month and periodically feature a short presentation from a local businessperson. Past presentations have included topics on cybersecurity, professional motivation and development, a start-up pitch, and a fundraiser for the Dress for Success program.  Also, raffles are conducted on a regular basis and special collections including a toy drive may be coordinated if needed during the holiday season.

On May 16, Basia Belz, owner of Vivid Hair Salon & Spa on Elm Street, will give a short presentation on her company’s success story.

“The main purpose of the gathering is to provide a forum where professionals can connect,” said McKellick. “From there, if there is business to be done, those parties would meet up outside of the group.”

McKellick added that feedback has been “positive” from conversations he has had with persons attending Westfield Networking Nights.

Both men are hopeful that the Westfield Networking Night gatherings will continue to grow in attendance and that individuals find “value” in attending. On average, 15 individuals attend the monthly gathering and on some occasions there have been as many as 30 in attendance.

“There are a lot of great businesses and a lot of talent in the Westfield market,” said McKellick. “It is a shame to see that talent venture off to big cities, particularly, when those people were not aware of what businesses are actually located here in the Pioneer Valley, as a whole.”

McKellick noted that the mission of the group is to “connect professionals with potential clients in need and work to retain the talent here in the marketplace.”

“We go out of our way to make people feel welcome and introduce individuals to reputable people who could be a good connection for them,” said Mayock. “At the end of the day we are trying to help other people.”

Meeting information on Westfield Networking Night can be found on Facebook, or for more information on getting involved with the group, email McKellick at [email protected].

“From a favorable introduction through networking, the opportunities to do business can open up,” said McKellick.