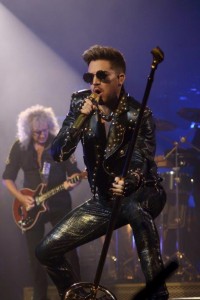 UNCASVILLE, Conn. – Queen came to Mohegan Sun on Saturday night and conquered the sold out crowd with amazing songs, excellent musicianship and superb showmanship.
Queen is back touring the entire United States with former American Idol finalist Adam Lambert as lead singer, who in my opinion stole the show. Lambert was in top form both vocally and visually on this night.
The band opened the show with Now I’m Here and moved quickly into the rawker Stone Cold Crazy before slowing down a little with Another One Bites the Dust. The stage was fairly minimal with a big oval video screen surrounded by lights as the backdrop for the band. The left side of the stage had a walkout area that led to the center of the floor seats.
Some other classic Queen songs came next like Fat Bottomed Girls, In the Laps of the Gods…Revisited and Seven Seas of Rhye. The lights went down for a brief few seconds before a purple couch with gold tassels showed up at the end of the walkout area. This is where Lambert started showing his true personality, singing Killer Queen while lying on the couch and drinking from a champagne bottle. This was a great little showcase for Adam while taking center stage.
Lead guitarist Brian May shined on vocals while singing the second verse of I Want It All. Right after the song Lambert asked the crowd to join him in wishing Brian May a happy birthday and then led the ten thousand in attendance for a nice sing a long of happy birthday to you. May then took center stage with just him and a twelve string acoustic while dedicating the song to the one and only Freddie Mercury. The beauty of this song was the giant video screen showing Mercury singing the last verse of the song.
The rest of the band including original drummer Roger Taylor, his son and other percussionist Rufus Taylor and bassist Neil Fairclough joined May center stage for a rendition of ’39. Roger Taylor then took over lead vocals for These are the Days of Our Lives. Unfortunately a bass solo and drum followed and completely took the momentum out of the show.
Keeping with Taylor singing, both he and Lambert did a great job with Under Pressure with Taylor’s part originally sung by David Bowie. The band proceeded back to center stage for a Freddie Mercury cover song Love Kills. A giant disco ball was then lowered from the top of the arena for rousing rendition of Who Wants to Live Forever.
…And speaking of momentum stoppers, Brian May possibly played one of the longest and most boring guitar solos I have ever witnessed live. This guy is a guitar god and most of the solo was just playing power chords. Once that mess was over with, Taylor’s son Rufus took control of his father’s drum set for a really lively version of Tie Your Mother Down.
One song from the Queen catalog that was a hit that I never really thought fit them was Radio Ga Ga. This didn’t seem to really fit the set either. They have too many other great songs to choose from. The rest of the set included Crazy Little Thing Called Love, The Show Must Go On and Bohemian Rhapsody. Bohemian Rhapsody utilized the large video screen and had Mercury singing the second verse and then video images of Queen from the 70s singing the chorus. Great way to end the set.
The band took a brief break and encored with ultra Queen classics We Will Rock You and We Are The Champions. Truly a great show over all. I was really impressed with Lambert and to spend a night listening to Queen songs, what more could I ask for? The band is back at Mohegan Sun on Friday night… go check them out.
Mike Augusti’s Rawk Report provides live reviews of local concerts in Connecticut and Massachusetts. The Rawk Report also includes new music releases and upcoming concerts to the area. [email protected] for any questions or comments.