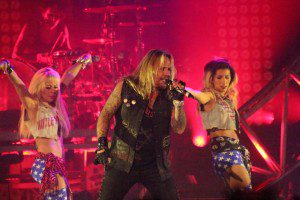 MONTVILLE, CT – Mohegan Sun welcomed Motley Crue to their arena on Saturday night by giving them a place on The Mohegan Sun Walk of Fame before the concert. The Walk of Fame is for artists who have performed multiple times at Mohegan Sun Arena, usually selling it out and over time have contributed to the arena’s success as one of the premier concert destinations in the country.
The Crue have recently announced they will be putting out one more new release that will be followed by a world tour and then they are officially calling it quits. So, for some fans, this visit to Mohegan Sun may very well be the last time they ever see them live again. Needless to say it was reportedly a sellout, a number of blue empty seats in the upper level may have told another story.
Motley opened their show with their anthem of sorts, Saints of Los Angeles, and quickly churned out a couple of classic Crue songs Wild Side and Shout at the Devil. Known for their stage shows, they didn’t disappoint with tons of lights, smoke and, of course, female dancers hanging from the rafters, singing back up and bringing out their instruments between songs.
Motley played something off of every release including early songs like Piece of Your Action and Live Wire, to a brand new song released last year, Sex, to everything in between. Midway through the set, a grand piano was lowered from the rafters which led to drummer Tommy Lee leaving his drum kit and taking a seat at the piano and kicking off the ballad Home Sweet Home. Once finished there, Lee went back behind his drums and kicked off a techno-rollercoaster-Rawk and Roll drum solo for the ages. Lee was strapped into his drum seat and he and his entire drum ensemble rocked back and forth until he was entirely upside down. Stopping at the top and swinging upside down, Lee continued to bang out a great drum solo with techno beats and pulsing lights backing him up.
After a brief half electric half acoustic guitar solo by Mick Mars, the band proceeded to finish off the night with Too Fast for Love, Primal Scream, Dr. Feelgood , Girls, Girls, Girls and ending the night with one of my top three Crue songs, Kickstart My Heart.
No encore necessary, as Motley came on the stage, played their hits (although there were definitely some that could have been left out of the set), rawked the crowd and called it a night. This isn’t my first time seeing the Crue, but if it is my last, I can say that they have been one of the most entertaining bands in music over the last 30 years and am proud to be a fan.