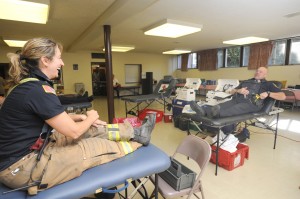 Fire Capt. Rebecca Boutin jokes with Police Officer Kerry Paton as they wait to donate blood Saturday morning at a Guns and Hoses ‘Blood Wars’ competition waged between their departments to collect blood for the American Red Cross. (Photo by Carl E. Hartdegen)

WESTFIELD – After three annual Guns and Hoses ‘Blood Wars’ to benefit Noble Hospital, the city’s police and firefighters have expanded their efforts and will benefit the American Red Cross with a second blood drive this year.
Fire Capt. Rebecca Boutin said Saturday morning while registering for her donation that Noble Hospital can accommodate only police and firefighters but a Red Cross blood drive can “get more and more of the community involved” as the Red Cross can handle more donors and allow the friends and relatives of the police and firefighters to participate.
“With the Red Cross we can bring in people who aren’t cops or firefighters” Boutin said.
With more participation possible the firefighters, who have come out second best each year in the competition to donate the most blood, may have a better chance to win the bragging rights involved.
The firefighters’ chances are also improved, one officer noted with tongue in cheek, by scheduling the event on a Saturday.
The officer said that a Saturday collection benefits the firefighters because the fire department’s staffing level is the same seven days a week while the on-duty roster at the police department shrinks drastically on weekends.
But, whichever department wins the bragging rights, The Red Cross also wins.
“We’re going to do it twice a year, once with Noble and once with the Red Cross” said Boutin, who also said “I love the Red Cross” and lauded the efforts of the organization.
“When people have a fire they call 911 and we show up” she said “but when we become overwhelmed, that’s when we call the Red Cross.”
She said that the blood drive “is kind of like our ‘Thank you’ to the Red Cross.