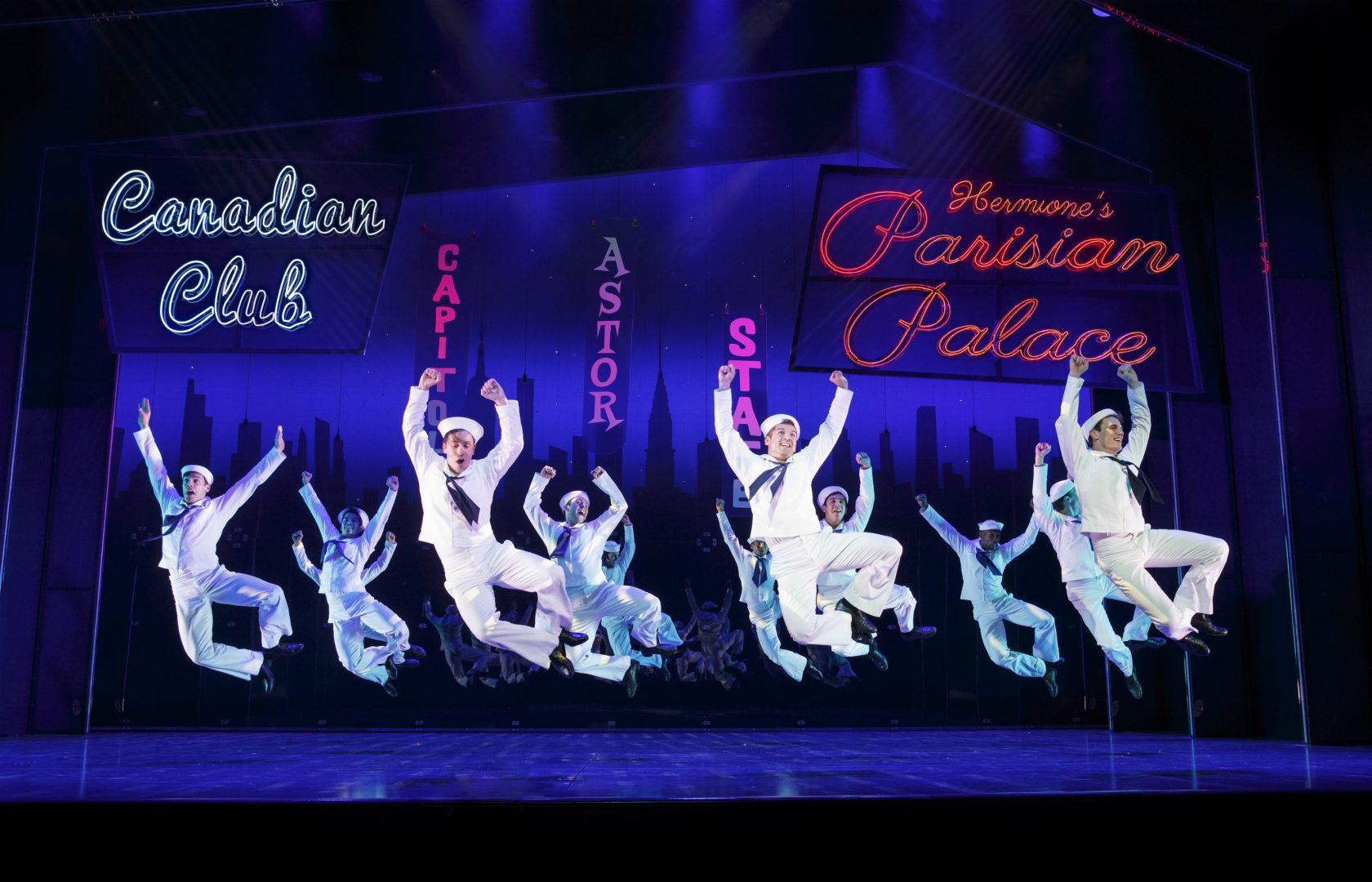 NEW YORK, NY – Barrington Stage’s summer of 2013 hit, “On The Town” has been retooled for Broadway, and the Leonard Bernstein/Betty Comden/Adolph Green/Jerome Robbins hit of 1944 has become Broadway’s big hit of 2014. It’s hard to believe that the almost-perfect Barrington Stage production, directed by John Rando and choreographed by Joshua Bergasse could get any better. But, it’s better than I’d remembered it to be in Pitsfield, with some of the best dancing I’ve seen on Broadway in years.
Beowulf Boritt tweaked the sets and added some wonderful projections to create a technicolor New York of the 1940’s. Jess Goldstein designed the costumes for New York, and Jason Lyons recreated the lighting design for the Big Apple. Rando’s staging remains crisp and taut, and Joshua Bergasse’s choreography, brilliantly performed by a larger chorus, is stunning on every level. They’ve added some singers and dancers, added the comedienne Jackie Hoffman and the operatic Phillip Boykin (of “Porgy and Bess”) to the cast. The role of Ivy Smith, Miss Turnstiles”, has been recast with New York City Ballet’s Megan Fairchild, who is sublime.
“On The Town” made its debut during World War II, the maiden Broadway effort of Leonard Bernstein and Jermone Robbins, who were inspired by their earlier collaboration, “Fancy Free”, a ballet about three sailors on leave in New York City. They’d go on to create “West Side Story”. Betty Comden and Adolph Green, who wrote the script and lyrics (and also starred in the original production), later made their mark with shows like “Wonderful Town”(again with Bernstein) “On The Twentieth Century” and “The Will Rogers Follies”. The musical shares the adventues of a trio of randy sailors, who discover a helluva “New York, New York” on a 24-hour leave, and in between sights, lights, and nights, seek out “companionship” before they’re shipped overseas to war.
This 70-year-old musical feels as fresh and delightful as it must have back in its day. There are a handful of fine Broadway melodies, an overabundance of jazzy ballets, and the music sounds fantastic under James Moore’s music direction, as played by a large orchestra. John Rando gives the staging a fast clip. Joshua Bergasse’s choreoigraphy, in the spirit of Jerome Robbins, is sweepingly balletic, snazzy and jazzy, and superb. If anyone wonders who can succeed Bob Fosse, Michael Bennett, and Tommy Tune as Broadway dance geniuses, it’s Bergasse. His previous work with Encore’s “Superman” and “Little Me” was fun. “On The Town” displays his choreographic genius.
Tony Yazbeck as “Gabey”, the sailor in search of Miss Turnstiles, is the heart and soul of “On The Town”. He dances beautifully, sings with conviction, and his pas de deux with the ethereal Megan Fairchild is the dance highpoint of the production. Cylde Alves and Elizabeth Stanley are fun as sailor Ozzie and new-found girlfriend Claire, a student of modern man both vertically and horizontally. Jay Armstrong Johnson and Alysha Umphress as sailor Chip and cab driver Hildy stop the show twice, first in a very funny wild ride through Manhatten (enhanced by Boritt’s projections) and the sizzling “I Can Cook Too”, which steams up the large Lyric Theatre.
If you’re looking for a family-friendly musical with a swinging score, fun performances, and some joyous dancing, “On The Town” hits the spot.
“On The Town”. Music by Leonard Bernstein. Book and lyrics by Betty Comden and Adolph Green. Based on an idea by Jerome Robbins. Directed by John Rdno. Music direction by James Moore. Choreography by Joshua Bergasse. Scenic design and projections by Beowulf Boritz. Costumes by Jess Goldstein. Lighting by Jason Lyons. Sound by Kai Harada. Lyric Theatre. 213 West 42nd Street, New York, NY. For tickets and information: http://www.onthetownbroadway.com/
Mark G. Auerbach studied theatre at American University and the Yale School of Drama. He’s worked for arts organizations and reported on theatre for newspapers and radio.