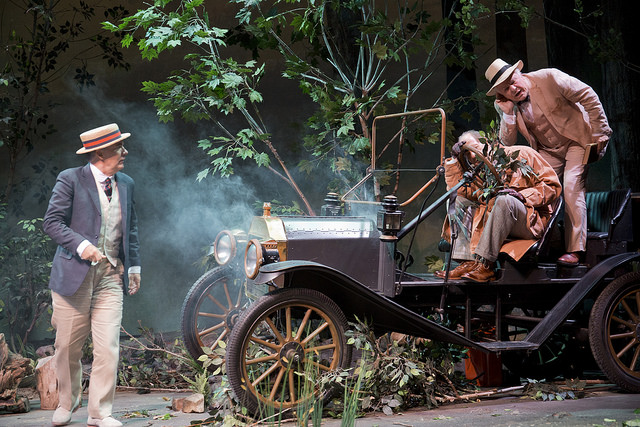 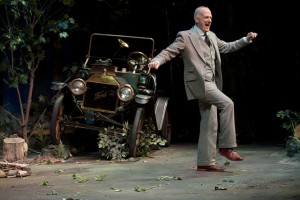 Patrick Husted in Camping With Henry and Tom at Barrington Stage. Photo by Scott Barrow.

Barrington Stage is extending the Berkshires summer season with a revival of Mark St. Germain’s Camping With Henry and Tom, one of the playwright’s earlier works that had its world premiere 20-plus years ago down the road at The Berkshire Theatre Festival, before enjoying an award-winning run in New York City. Since then, St. Germain has been a prolific playwright, many of whose works have graced the stage at Barrington Stage, among them Freud’s Last Session, Dancing Lessons, and Dr. Ruth: All The Way. You may have seen the latter two at TheaterWorks in Hartford, where his newest play, Relativity, opens this month with Richard Dreyfuss as Albert Einstein.

There’s lots to like in Camping With Henry and Tom, St. Germain’s fictionalized rendering of an encounter between President Warren Harding, inventor Thomas Edison, and tycoon Henry Ford, when they get stranded in the woods, as Ford hits a deer and gets run off the road. Over the next few hours until they’re found by Harding’s Secret Service man, Col. Starling, they discuss the world of 1921, politics, ambitions, and more, in a script that’s still very relevant during this 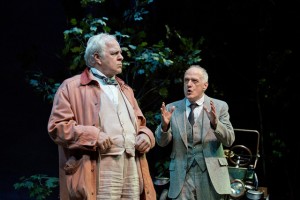 PJ Benjamin and Patrick Husted in Camping With Henry and Tom at Barrington Stage. Photo by Scott Barrow.

David Barber’s set is simply astonishing, and one of the best I’ve seen in a non-musical play this year. It’s a forest glen, complete with smashed up Model T and what appears to be a functioning campfire. Charlotte Palmer-Lane’s costumes are sublime, and Scott Pinkney’s lighting design is pure art, moving the forest from daylight to sunset to night.  It rivaled if not surpassed the sunset that followed us home along the MassPike.

Kevin O’Rourke is a very human Warren Harding, a conflicted President who would prefer to be behind the scenes. PJ Benjamin gives Thomas Edison a humorous edge too a man wise in all things science as well as human nature. Patrick Husted shows the rough edge of businessman Henry Ford, hungry for power at all cost. Revelations about Ford turn the character unlikeable, but there’s everything to like about Husted’s portrayal. The actors play well off each other, and there’s a fine sense of ensemble. 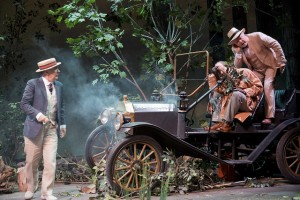 Kevin O’Rourke, Patrick Husted and PJ Benjamin in Camping With Henry and Tom at Barrington Stage. Photo by Scott Barrow.

Barrington Stage and Mark St. Germain have a long-standing relationship, and it’s nice to see the theatre company put so much into presenting this playwright. Camping With Henry Tom is feast for the eyes, thanks to scenic director David Barber and lighting designer Scott Pinkney.