EAST HADDAM, Conn. – Goodspeed Musicals has opened its 51st season with a revival/revisal of the 1950s Broadway hit musical, “Damn Yankees”. For a bit over two hours, the miniature Goodspeed stage is magically transformed to Fenway Park, which is inhabited by a slick devil, a baseball star hitter, his eye-candy singing and dancing team mates, some funny fans, and a temptress named Lola, who slithers through some seriously hot dance moves.
Based on the Faust legend and the Douglass Wallop novel “The Year The Yankees Lost The Pennant” (Wallop and George Abbott wrote the script), with a hit parade of showtunes, including “Heart” and “Whatever Lola Wants…”, “Damn Yankees” is the story of a diehard baseball fan. Fan sells his soul to the devil to help the home team win the World Series.
I’ve never seen a professional stage version of “Damn Yankees” before–only the movie adaptation which cast the Broadway stars Ray (“My Favorite Martian”) Walston and Gwen Verdon in the roles they originated on stage. The losing team was the Washington Senators. In the Goodspeed version, Joe DePietro has revised the script to make the losers the Boston Red Sox. Can they overcome the Curse of the Bambino? Can the fan who sold his soul help them win and reverse his curse? 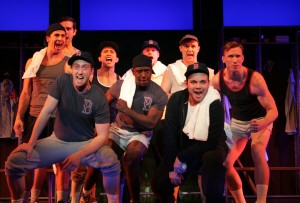 “Damn Yankees” was composer and lyricist Richard Adler’s and Jerry Ross’ second Broadway hit (after “The Pajama Game”). Sadly, Ross died at age 29, shortly after “Damn Yankees” opened. Music director Michael O’Flaherty, orchestrator Dan DeLange, and the band give the score high gloss. It sounds very contemporary, and is much better than some of the scores that pass for good music on Broadway today.
David Beach’s devilish Applegate is a performance with slapstick and vaudeville undertones, and very funny. Angel Reda, as the sensuous Lola, is a triple force dancer/singer/actor with high kicks, seductive poses, and comic flair. James Judy, as the baseball fan, and Stephen Mark Lucas, as the baseball star he morphs into, are fine, as is Ann Arvia as the baseball “widow”, whose husband plunks himself down before the tube for six months every year. Lora Lee Gayer is a determined sports reporter. Kristine Zbornik and Allyce (“Moonlighting”) Beasley are hilarious as two Red Sox fans smitten by the star jock. The rest of the cast and chorus are great.
Daniel Goldstein’s staging is slick and clever, and Kelli Barclay’s choreography is energetic (and deftly performed by the company). Adrian Jones’ Fenway sets are clever, and well-enhanced by Brian Tovar’s lighting; David C. Woolard’s costumes, from Red Sox uniforms to locker room towels to 1950’s suburban casual, are great. Jay Hilton’s sound design needs work. The orchestra was loud at the performance I saw. It drowned out some of the singers.
I’m not sure that the revision which includes the Red Sox would necessarily play out well outside New England, but “Damn Yankees” will. It’s an often forgotten gem of a musical that had the audience in stitches and applauding wildly. “Damn Yankees” runs at Goodspeed through June 21. If you wait too long to snag tickets, you’ll strike out at the box-office.