Lots of Flash / Lots of Dance
HARTFORD – In days of old, Hollywood turned to Broadway for source material for the movies. Times have changed, and Hollywood provides Broadway with fodder for new musicals. Sometimes, the results are terrific, when a movie lends itself to Broadway. “The Producers”, “Hairspray” and “Kinky Boots” are prime examples. Other movies have trouble making the leap.
“Flashdance: The Musical” is the newest effort. It plays Hartford’s Bushnell through Sunday on a national tour, which producers hope may end up on Broadway. Based on the 1983 movie, starring Jennifer Beals as a Pittsburgh welder by day, exotic dancer by night, and professional dancer by dreams, “Flashdance” had a number of hit songs in its score (“What A Feeling”, “Maniac, and “Gloria”). By the time the movie made it to VHS, ripped sweatshirts and leg warmers had become style headlines. Paul Tazewell’s costumes recreate that look in many colorful variations.
There’s lots of flash in “Flashdance: The Musical”–superlative sets, lights and projections by Klara Zieglerova, Howell Binkley and Peter Nigrini respectively. There’s also lots of dance, courtesy of Sergio Trujillo (who also directs). From opening number to finale, the action never ends. Trujillo puts the musical on a slick pace. MTV video style dancing interweaves with ballet, as set pieces weave in a very-well-timed syncopation. The ensemble performs with energy, and a buff and nimble cast perform moves that often thrill. 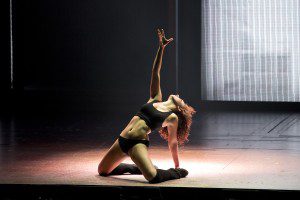 Jillian Mueller as Alex Owens in “Flashdance: The Musical”. (Photo by Jeremy Daniel.)

“Flashdance: The Musical” is relatively faithful to the film. Tom Hedley and Robert Cary provide the story of Alex (Jillian Mueller), the welder/dancer. She has aspirations of becoming a professional dancer, championed by Hannah (Jo Ann Cunningham), a former ballerina. Her welder boss, Nick (Corey Mach), is interested in Alex, but also faced with a tough decision as to how to downsize his family’s welding company. Alex gets support from a trio of fellow dancers, Kiki (Dequina Moore), Gloria (Ginna Claire Mason), and Tess (Alison Ewing).
Robbie Roth wrote over a dozen songs for the stage production; Roth and Robert Cary provided the lyrics. In the movie, the songs were primarily performed in the dance sequences, which mirrored videos making MTV the big thing of the time. In the show, the songs are used in the more conventional musical theatre sense. Doug Besterman’s orchestrations are masterful, but none of the songs really stand-out.
“Flashdance: The Musical” is all style over substance. The problem with this high-volume adaptation is the one-dimensional writing of the characters, leads and supporting. There’s no suspense in “Flashdance: The Musical”, no nuance, and no poignancy. Theatre offers that opportunity, but “Flashdance: The Musical” feels like one “”Dancing With The Stars” production number after another. I never felt connected with any of the people in the story 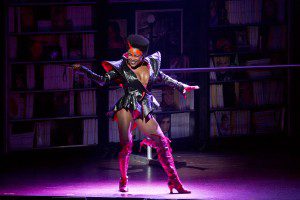 Dequina Moore as Kiki in “Flashdance: The Musical”. (Photo by Jeremy Daniel.)

As Alex, Jillian Mueller dances very well, sings adequately, and acts somewhat one-dimensionally. The role calls for someone who can take center stage and own it, and Mueller doesn’t seem to find her stride until the finale of the first act, where in “Maniac”, her frenzied go go dance is rewarded with the “big splash”. Her second-act “11:00 number”, “Let Go”, shows more power.
Overall, the performances are fine. I particularly liked Dequina Moore as Alex’s sassy sidekick, Kiki. She turns the song “Manhunt” into the musical’s showstopper. I do want to see more of director-choreographer Sergio Trujillo’s work. I think he could be a mover and shaker in future Broadway dance.