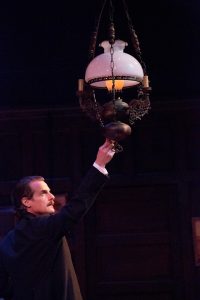 In a season punctuated by glorious revivals of Ragtime and Company, Barrington Stage may have saved its best for last. The current revival of Patrick Hamilton’s thriller Gaslight, carefully crafted and winningly performed, is a study in psychological manipulation and bullying. It may have been shocking to audiences in 1938. It’s even more disturbing to today’s audiences, as an unsavory relationship unfolds in terms of what we find acceptable or unacceptable today.

Gaslight premiered in London in December 1938, at the Apollo Theatre. When the play premiered on Broadway in December 1941, it was titled Angel Street and ran 1,295 performances. The Broadway cast featured Vincent Price as Mr. Manningham and Leo G. Carroll as Rough.  Patrick Hamilton had two hits to his name, Gaslight, and Rope, on which Alfred Hitchcock’s thriller was based.

The noun gaslight is defined as “A form of manipulation through persistent denial, misdirection, contradiction, and lying in an attempt to destabilize and delegitimize a target.”. Some psychologists credit the Patrick Hamilton play for the definition. 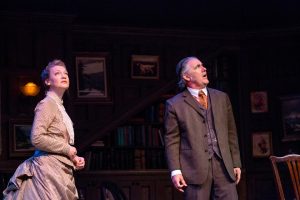 As Gaslight progresses, a serpentine husband is driving his wife insane by making her think she’s insane. A police inspector comes to the rescue, but one wonders if he’s real or whether he’s part of the beleagured wife’s fantasies. As Gaslight unfolds, the husband becomes more villianous, and the wife finds the inner strength to move through a powerful transformation.

Louisa Proske’s direction is measured and balanced, and her company of actors are superb. Mark H. Dold, a familiar face to Barrington Stage audiences as the theatre’s Associate Artist, gives a superlative performance as a vicious man disguised in a mannered presence. Kim Stauffer is superb as his victimized wife. Kevin O’Rourke brings humor to his role as a detective, and Peggy Pharr Wilson and Ali Rose Dachis add balance as the maids.

Kate Noll’s set design is a rich recreation of a New York City townhouse of the 1880s, and Beth Goldenberg’s costumes are appropriately period. Scott Pinkley’s lighting designs set the mood, and I was astrounded at the sense of timing as the actors turned up the gaslights, and the increased glow on the stage. 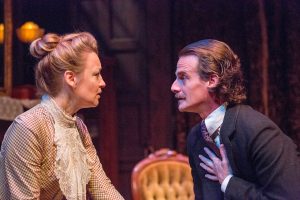 Barrington Stage has announced two productions for the upcoming season, the world premiere of The Royal Family of Broadway, based on the play by George S. Kaufman and Edna Ferber, book by Rachel Sheinkin and music and lyrics by William Finn. John Rando will direct and Joskua Bergasse will choreograph. Both gentlemen helmed Barrington Stage’s On The Town, which moved to Broadway. Also, in celebrations of the centennials of Leonard Bernstein and Jerome Robbins, Julianne Boyd will stage West Side Story. Robert LaFosse will choreograph. Summer can’t come fast enough.