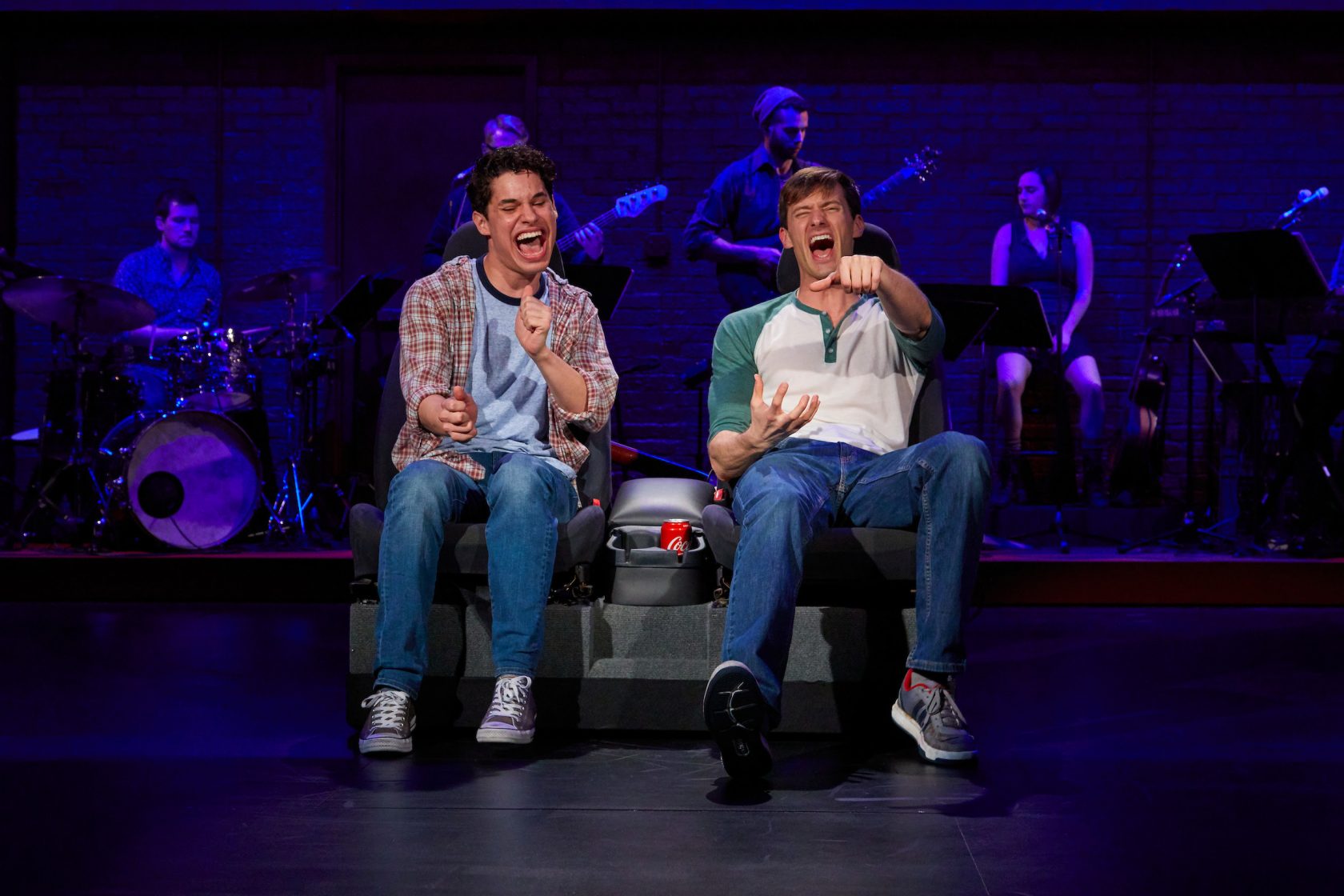 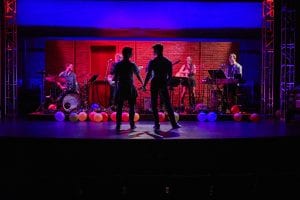 David Merino and CJ Pawlikowski in Girlfriend at Theaterworks. Photo by Lanny Nagler.

Remember your very first “crush” on someone and your coming-of-age experiences? Girlfriend, the new Todd Almond musical at TheaterWorks, inspired by and featuring the music of Matthew Sweet, is a poignant and touching tale of two teen boys, drawn together through the power of music, in 1993 Nebraska. In that summer between high school and college, big man on campus Mike and wallflower Will close one chapter in their lives, and begin a new chapter into uncharted territory.

Coming of age is tough anywhere,and coming out at that time even tougher. These were the days of Don’t Ask, Don’t Tell, the Defense of Marriage Act; the one step forward with Ellen Degeneres coming out on national TV and the two steps backward with the horrific murder of Matthew Shepard in a flyover state. Even today, where the LGBTQ community has achieved incredible strides, from the first gay marriage in Massachusetts to full marriage equality nationwide, there is homophobia.everywhere. And even though we currently have an out married man as a potential presidential candidate from a red state So, there’s caution in optimism. 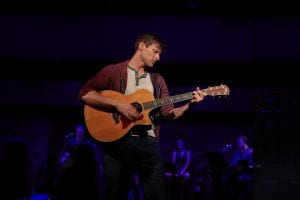 CJ Pawlikowski in Girlfriend at Theaterworks. Photo by Lanny Nagler.

Matthew Sweet’s music is charming, and Todd Almond has fashioned a tender tale around Sweet’ tunes for his album Girlfriend, a 1991 pop-rock album. Rob Ruggiero, who has staged the intimate musical Next to Normal and the intimately larger-than-life The Legend of Georgia McBride for TheaterWorks, hits another home-run with Girlfriend, which feels intimate, although the musical is playing the much larger theatre at the Wadsworth Athenaeum, while TheaterWorks is undergoing a renovation.

Brian Prather, the set designer whose works are seen frequently at TheaterWorks and Barrington Stage, has designed a great set for the larger Wadsworth Athenaeum stage, which places the quintet o musicians in center stage. Joshua D. Reid’s sound  is excellent, balancing the singers and instrumentalists, and providing sound effects from a drive-in movie soundtrack to barking dogs. Blair Gulledge’s costumes and Rob Denton’s lighting are polished.

David Merino from the Rent 20th anniversary tour an CJ Palikowski from The Book of Mormon are perfection as Will and Mike, balancing the tentative bravado of high school teens with strong vocal skills and superb onstage chemistry. Kudos to the fantastic quintet of musicians accompanying Merino and Palikowski, under the able direction of Evan Zavada. 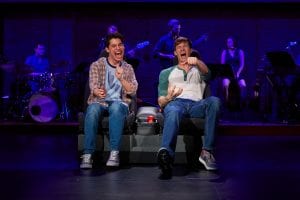 David Merino and CJ Pawlikowski in Girlfriend at Theaterworks. Photo by Lanny Nagler.

I went back to my high school, Northfield Mount Hermon, last year for a reunion, and my classmates and I recalled how difficult it was to navigate senior year in between raging hormones,and  fear and anticipation about leaving familiar turf for college. Girlfriend brought back some of those nostalgic memories which seemed so high-drama at the time. Girlfriend will have you nostalgic for those times, and happy to have cheered on Will and Mike in their coming of age.