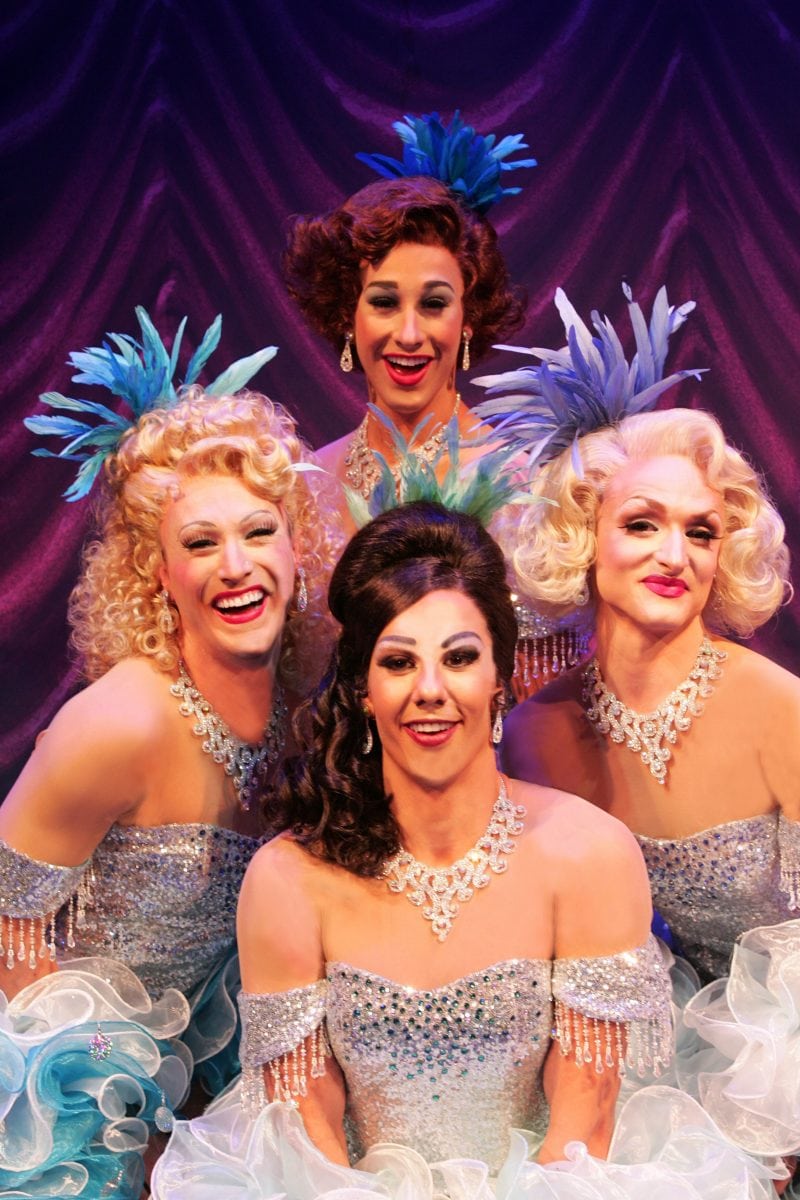 EAST HADDAM, CT – As an arts reporter, I generally see a couple of shows a week, and it’s usually easy to maintain an eye for detail. Something happened to me tonight at Goodspeed Musicals’ La Cage Aux Folles. I got totally drawn into Harvey Feirstein’s wise and witty script, Jerry Herman’s hummable melodies, Ralph Perkins’ dazzling choreography, and swept away by great performances, the laughs, and the tears. The enthusiastic Goodspeed audience went wild several times, and the show got a rousing standing ovation, with me among the first to jump to my feet. Although I’ve seen La Cage Aux Folles before, I was completely taken by this production. It was the best evening of musical theatre I’ve seen all year, and perhaps, one of the best I’ve seen in years.
Harvey Fierstein and Jerry Herman fashioned La Cage Aux Folles from a French play by Jean Poiret, which itself was made into a movie. When it opened on Broadway in 1983, as the theatre community was ravaged by the early days of AIDS, it carried a strong message to audiences, as it was one of the first plays or musicals to portray gay men in a positive and affirming light. It was also very tuneful and funny, and audiences adored the musical which won all kinds of awards. In fact, both subsequent Broadway revivals of the show won the Tony Award for Best Revival of a Musical. Two Jerry Herman tunes, “I Am What I Am” and “The Best of Times” have become familiar standards. Hollywood couldn’t wait to adopt the show into a film, and they did–as a non-musical vehicle for Robin Williams and Nathan Lane called Birdcage. 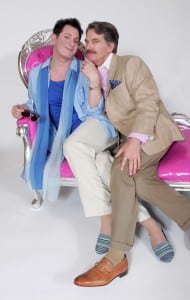 La Cage Aux Folles is the story of a nightclub owner, Georges (winningly portrayed by James Lloyd Reynolds) and his partner, Albin (Jamison Stern in one of the best performances I’ve seen in any musical) who stars as Zaza, the club’s “leading lady”. The son they’ve raised comes home with his fiancee, who happens to be the daughter of the most right-wing conservative political candidate in town. Son asks parents to make the household more straight. Hilarity ensues.
Rob Ruggiero, artistic director of Hartford’s Theaterworks, and a frequent Goodspeed director, mines the humor, sentimentality, and outrageousness in script and score to give the production a warm yet slightly risque edge. Michael O’Flaherty’s music direction is superb, and Ralph Perkins creates some high-kicking can cans and rousing dance moves, all performed on Michael Schweikardt’s charming set, in Michael McDonald’s opulent and clever costumes. John Lasiter’s lighting design is perfection, and Jay Hilton’s sound design balanced singers and the band. 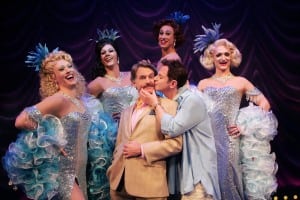 Messrs Reynolds and Stern may be La Cage Aux Folles fun couple, but they are surrounded by a group of glamourous “girls”, the Notorious Cagelles… Darius Barnes, Michael Bullard, Alexander Cruz, Erin M. Kernion, Alex Ringler, Nick Silverio, and Nic Thompson. Boy, can these guys as gals dance, with great extension and high kicks, all in high heels. Cedric Leiba Jr. is hilarious as the houseboy, Jacob; Conor Ryan is a delight as Georges’ and Albin’s son Jean-Michel.
Goodspeed Musicals has been producing musicals for over fifty years, and they do it well. What makes La Cage Aux Folles so special is Goodspeed’s commitment to showcasing great material with strong direction and choroegraphy, fine performances, and a beautiful production. They also let the heart-warming message and sentimentality come through without being forced. That’s what great musical theatre is all about.
Goodspeed Musicals presents “La Cage Aux Folles”. Book by Harvey Fierstein, based on the play by Kean Poiret. Music and lyrics by Jerry Herman. Directed by Rob Ruggiero. Choreography by Ralph Perkins. Musical direction by Michael O’Flaherty. Scenic design by Michael Schweikardt. Costume design by Michael McDonald. Lighting design by John Lasiter. Sound design by Jay HiltonThrough September 10. Goodspeed Opera House, E. Haddam, CT. For tickets: 860-873-8668 or www.goodspeed.org.
Mark G. Auerbach studied theatre at American University and the Yale School of Drama. He’s worked for arts organizations and reported on theatre for newspapers and radio.