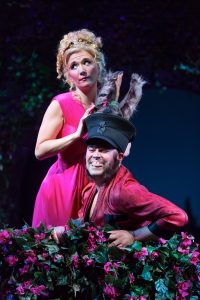 Hartford Stage opens its new season with Artistic Director Darko Tresnjak’s vision of Shakespeare’s A Midsummer Night’s Dream, one of the Bard’s most beloved comedies, and for good reason. It’s set in the lazy days of summer, in a forest with sprites and fairies. There are two sets of lovers, a bedraggled set of “mechanicals” who are rehearsing a play, and of course, a wedding in the woods. What sets Hartford Stage’s production apart from others is that it’s laugh out loud hysterically funny, and the play within a play, the story of Pyramus and Thisbe has more laughs than a melange of Mel Brooks, Jerry Lewis and SNL combined..

A Midsummer Night’s Dream has enchanted audiences for centuries, and inspired artists to create their own takes on the classic. Purcell and Mendelssohn wrote musical versions to accompany and enhance the play. Britten wrote an opera. Balanchine and Ashton choreographed ballet versions. There have been numerous film adaptations, the most famous, perhaps, being a 1968 Royal Shakespeare Company version staged by Peter Hall, with Judi Dench, Diana Rigg and Helen Mirren. In any version, A Midsummer Night’s Dream is pure and sublime enchantment. 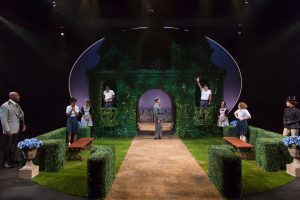 Darko Tresnjak, Hartford Stage’s Artistic Director, has an affinity for Shakespeare, and with the support of an exquisite design team, and an ensemble of elegant and comedic actors and musicians, balances fast-paced comedy, vaudeville, and ethereal poetry into an evening rich in theatricality. Alexander Dodge’s impressive set, a garden gate house that separates the order of the Duke’s society with the whimsy of the sprites, revolves cinematically, as the action moves back and forth. Joshua Pearson’s array of costumes are stunning; York Kennedy’s lighting creates rich tableaus. Alexander Sovronsky’s music score accompanies the play superbly. Hartford Stage’s recent Shakespearean productions under Tresnjak’s direction–Hamlet, Romeo and Juliet, and The Comedy of Errors are all terrific examples of this group’s ability to make Shakespeare seem contemporary without setting it in the current year. A Midsummer Night’s Dream surpasses them all. 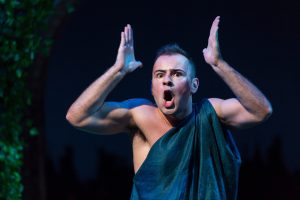 Will Apicella in A Midsummer Night’s Dream. Photo by T. Charles Erickson.

Esau Pritchett and Scarlett Strallen in the dual roles of Theseus and Hippolyta and Oberon and Titania bring a distinct difference to their portrayals of Greek gods and imaginary royals. The two pairs of lovers, Jenny Leona and Tom Pecinka, and Damian Jermaine Thompson, and Fedna Laure Jacquet are terrific. A scene in which Jacquet is caught between the flirtations of Pecinka and Thompson, is brilliant in its staging, and punctuated by the trio of actors’ perfect sense of physicality and timing. As for the laughs, John Lavelle as Bottom, the chauffeur who gets turned into a donkey, is tour-de-force funny, as is the entire group of actors in the play within a play. Will Apicella is an appealing Puck.

If you’ve put off seeing Shakespeare because you suffered through a literature class with a teacher who couldn’t teach theatre, or if you’ve never seen a Shakespeare production before, Hartford Stage’s A Midsummer Night’s Dream is for you. It’s first class in every detail, loaded with laughs, and offers the best in staging, design, and performances I’ve seen of the Bard of late..