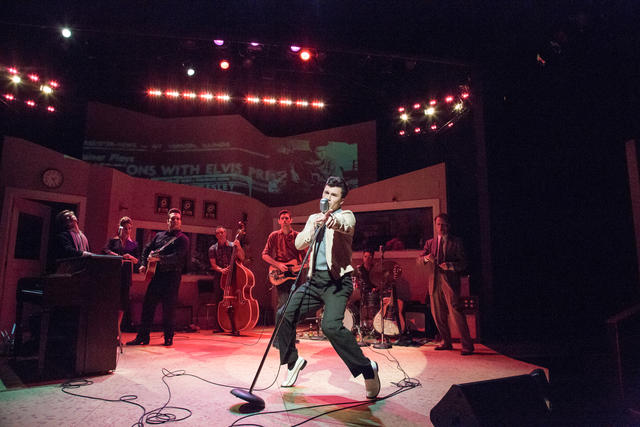 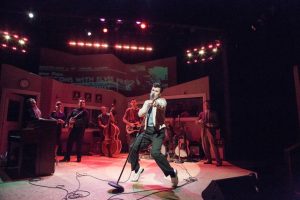 Finally, it feels like theatrical summer with Berkshire Theatre Group’s marquee lit up. There’s an overload of sizzle and splash happening at the Unicorn Theatre, as Million Dollar Quartet rocks and rolls the night away in bucolic Stockbridge. It’s a flash back to one night in December, 1956, at Sun Records in Memphis. Rockabilly star Carl Perkins is reworking his song “Matchbox”, when fellow Sun recording artists Jerry Lee Lewis, Johnny Cash and Elvis Presley stop by. An impromptu jam session takes place, and producer Sam Phillips had the smarts to record it. A local reporter who was called and sat in on the session headlined his newspaper article which ran the next day, “Million Dollar Quartet”. 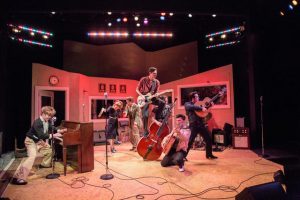 The Broadway production of Million Dollar Quartet premiered in 2010, was subsequently nominated for three Tony Awards, including “Best Musical”, and Million Dollar Quartet went solid gold at box-offices everywhere. You can’t go wrong with a juke-box musical, when the score includes one solid gold hit after another, classics like  “Blue Suede Shoes,” “Fever,” “Walk the Line,” “Sixteen Tons,” “Who Do You Love?,” “Great Balls of Fire,” “Folsom Prison Blues,” and  “Hound Dog.”

James Barry, a frequent Berkshire Theatre Group actor who made his professional debut on the Unicorn stage 18 seasons ago, toured in Million Dollar Quartet as Carl Perkins for a couple of years. He makes BTG directorial debut with Million Dollar Quartet, an example of BTG’s ability to create a great creative environment where folks return season after season.  Barry’s staging, is well-supported by Jessica Ford’s sets and costumes, great lighting effects by Oliver Wason, a superb sound mix by Nathan Leigh, and creative projections by Nicholas Hussong. Barry creates a great sense of ensemble, while showcasing the musical talents of his gifted cast, all top-notch instrumentalists and singers. As an opening night encore, Barry joined the company for a number. Talk about sizzle! He’s now off to do Million Dollar Quartet on the road, but he’s left plenty of heat behind. 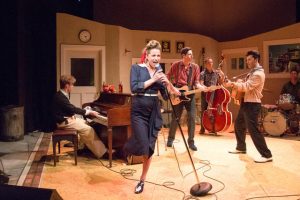 From our vantage point, slightly stage right, we could see Gabriel Aronson work the keyboard from all angles with hands and feet–an acrobatic rendering of Jerry Lee Lewis with perfect musicality and astonishing technique. I loved Brycen Katolinsky’s spot-on Elvis moves and tones–that of Elvis on the rise before his Vegas days.  Christy Coco’s performance as Dyanne was great, including her rendition of “Fever”. Bill Sheets is an impressive Johnny Cash, and I liked Colin Summers’ rendering of Carl Perkins.

One note: there’s a lot of road work going on between the Mass Pike Exit 2 and Stockbridge, so give yourself some extra time getting to the Unicorn.