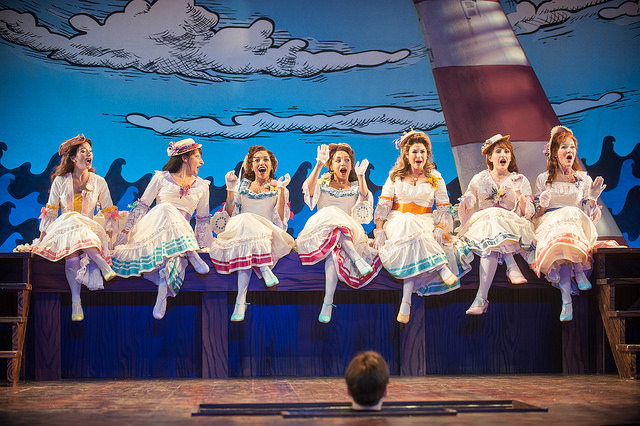 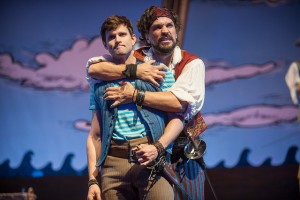 Kyle Dean Massey and Will Swenson in The Pirates of Penzance at Pittsfield’s Barrington Stage. Photo by Kevin Sprague

A couple of years ago, Barrington Stage sent its production of On The Town to Broadway, receiving rave reviews and some Tony Award nominations for the Pittsfield theatre. This season, Barrington Stage reassembled the team to present the Gilbert and Sullivan operetta The Pirates of Penzance. This 1879 New York hit, revised by Joseph Papp’s New York Shakespeare Festival almost one hundred years later, is one of the unexpected summer delights, and a must-see in Pittsfield through August 13.

The Pirates of Penzance, which unlike other Gilbert and Sullivan operettas, made its debut in New York before moving to London, has been performed frequently on both sides of the Atlantic ever since. However, when Papp revised the musical, adding some musical snippets from other Gilbert and Sullivan hits, Ruddigore and HMS Pinafore, and casting rocker Linda Ronstadt in her Broadway debut, alongside teen idol Rex Smith, and movie star Kevin Kline, The Pirates of Penzance returned to Broadway with SRO status.

Director John Rando has cast The Pirates of Penzance with some of Broadway’s and London’s brightest talents; and cleverly set them in action onstage and throughout the theatre.  Darren R. Cohen’s musical direction brings out the best of Sullivan’s score, which sounds surprisingly “current”. A fine example is David Garrison’s “I Am The Very Model of a Modern General” is a patter song with hints of 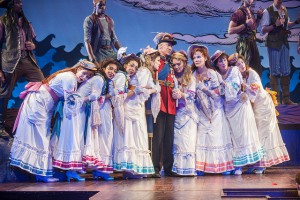 David Garrison and the Daughters in The Pirates of Penzance at Pittsfield’s Barrington Stage. Photo by Kevin Sprague

Sondheim, for example, mixed in with a cadence of Lin Manuel Miranda’s Hamilton. Joshua Bergasse’s choreography keeps the ensemble moving non-stop, and his dance numbers or the police are showstoppers. The Pirates of Penzance feels fresh and new, with simply dazzling staging, on a par with just about anything on Broadway today.

Broadway’s Tony nominee Will Swenson, with his matinee idol good looks and cartoonish swagger, is a highly comedic Pirate King. Kyle Dean Massey, direct from Broadway’s Pippin and the national tour that played Hartford last year, is an appealing Frederick with a rich voice. David Garrison is a polished Major General. Jane Carr gives a satisfying performance as Ruth, the woman who raised Frederick. I loved Scarlett Strallen’s performance as Mabel, with a powerful coloratura soprano and a winsome demeanor. Alex Gibson’s physical dexterity as the police Sargeant played to good effect in Bergasse’s choreography for the cops. The ensemble was terrific. So was the band.

Beowulf Borritt’s sets for the pirate ship and the Major General’s estate are clever, and the stage extends out into the audience to bring 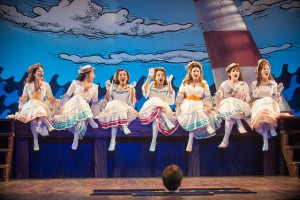 The Major General’s Daughters in The Pirates of Penzance at Pittsfield’s Barrington Stage. Photo by Kevin Sprague

Three sailors on leave in New York in On The Town brought Barrington Stage significant recognition on the Broadway scene. The Pirates of Penzance, under the helm of the same creative elements could bring Barrington Stage back to New York with even more accolades.