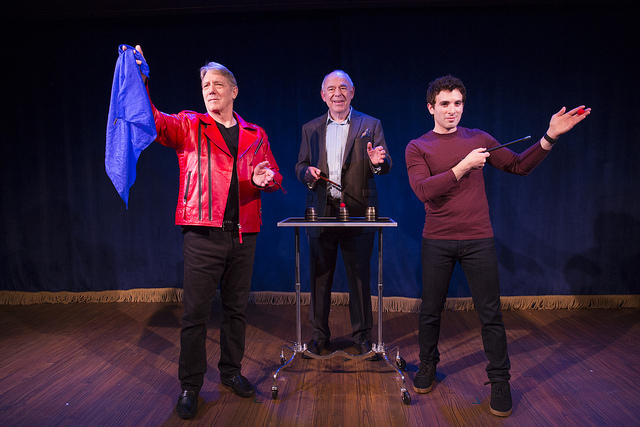 Barrington Stage Company kicks off the summer theatre season in the Berkshires with a world premiere, the musical Presto Change-O on their St. Germain Stage (through June 11) in 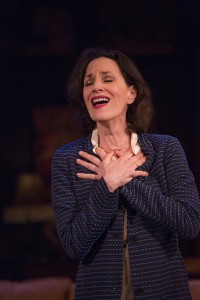 downtown Pittsfield. Presto-Change-O was commissioned by Barrington Stage and developed in its Musical Theatre Lab. Kudos to the theatre’s producers, funders, and creative team for taking on the development of a new musical, particularly one that’s not an adaptation of a known book or movie,or a biography wrapped around famous tunes,  Kudos also for taking a topic generally not explored on the stage (the backstage world of magicians).

Presto-Change-O is the story of a famous magician, whose body and mind are fading–his magic doesn’t always work. His daughter is estranged from her ex-husband, Lance Presto, a once-in-demand magician, who in turn, is estranged from their son, an illusionist. Also in the mix are an assistant to Lance with dreams of becoming a magician herself, and Lance’s brother, who has a scheme to get the fractured family back onstage. Eric Price’s book delves into the the rules of the magic business and the ethics—never steal a trick, and always support another musician. He’s given each character a context, most revealed in song. Joel Waggoner’s score has a couple of really strong tunes, “One Hand To The Next”–a catchy vaudeville-tinged song about teaching magic from one generation to the next; and “If I Were Magic”–a charming duet for the son and the assistant that has the most heart of the score. 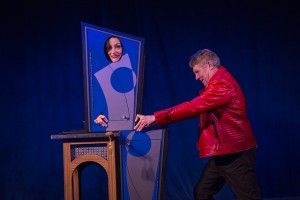 Mark Bruni’s direction is thoughtful, and Joseph Wartnerchaney’s illusions and magic are fascinating. Vadim Feichtner’s music direction is top-notch. Derek McLane’s sets, Alejo Vietti’s costumes, and Ken Billington’s lighting design serve the production well. In the intimate St. Germain Theatre, Brad Berridge’s sound was too loud, and it made the nuances of the musical performances difficult to savor.

Barrington Stage assembled a  great cast for Presto Change-O. Michael Rupert and Barbara Walsh, who played ex-spouses in the acclaimed Broadway production of Falsettos, are terrific as ex-spouses here. Lenny Wolpe captures the texture of an elder magician whose body and mind are failing him.. Jarrod Spector from Broadway’s Beautiful and Jenni Barber from Broadway’s Wicked (and Hartford Stage’s Private Lives) are superb. Bob Walton completes the cast. 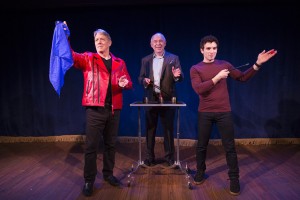 With some thoughtful revisions, I think Presto Change-O has a future. I’m glad to see Barrington Stage Company open its season with something new and completely different. And, a heads-up: Presto Change-O is not a cavalcade of magic tricks, illusions, and oohs and ahhs. This is serious fare about magicians and what magic does to them, onstage, backstage, and offstage.