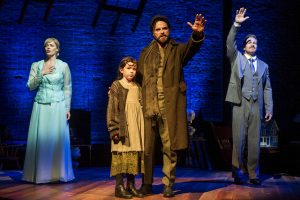 Barrington Stage has opened its Boyd-Quinson Mainstage season with a handsome production of Ragtime, beautifully staged by Joe Calarco with an assist from Shea Sullivan’s choreography and Darren R. Cohen’s musical direction, which takes the musical’s rich score center stage..

Ragtime, with book by Terrence McNally, lyrics by Lynn Ahrens, and music by Stephen Flaherty, the trio that created Hartford Stage’s and Broadway’s Anastasia, is based on E.L. Doctorow’s panoramic 1975 novel and subsequent film treatment by Milos Forman. Ragtime premiered in Toronto, played Los Angeles, and then opened on Broadway in 1998. Audra McDonald, Brian Stokes Mitchell, Judy Kaye and Lea Michele were alums of the original cast. The grand and sweeping musical was revived in 2009 in the hands of StageWest alum Marcia Milgrom Dodge. That production starred Christiane Noll from TheaterWorks’ Next to Normal and Robert Petkoff from the Fun Home tour at The Bushnell last week. 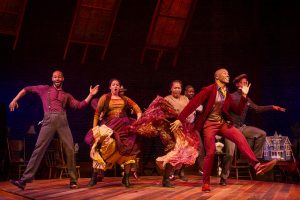 Darnell Abraham and the ensemble of Ragtime. Photo by Daniel Rader

Ragtime is set in and around New York from 1902 and weaves the stories of an upper-class white family in the suburbs, Jewish immigrants arriving through Ellis Island, and early 20th century African-Americans amidst historical figures from the era including Emma Goldman, Harry Houdini, Evelyn Nesbit and Henry Ford. McNally’s book is rich in historical perspective, and the Ahrens and Flaherty score mines the marches, ragtime, cakewalks and gospel of the era. One number, “Wheels of a Dream” is one of the finest ever written by Ahrens and Flaherty.

There are some ravishing performances in this Barrington Stage production. Darnell Abraham is a powerhouse as Coalhouse Walker, the Harlem piano man, who seeks freedom and justice for his newborn son with Sarah, sung to perfection by Zurin Villanueva. Elizabeth Stanley from Barrington Stage’s and Broadway’s On The Town, and David Harris from TheaterWorks’ Next to Normal and Goodspeed’s Anything Goes, are great in the roles of Mother and Father, family figures of a privileged white family in New Rochelle. J. Anthony Crane commands the stage as Tateh, a Latvian immigrant who wants a better life for his daughter. Hunter Ryan Herdlicka from Broadway’s A Little Night Music, is affecting as the suburban idealist caught up in the turbulent fights for freedom. The ensemble, playing multiple characters, are fine. Ultimately, this Ragtime is Coalhouse Walker’s story because of Darnell Abraham’s superb performance. 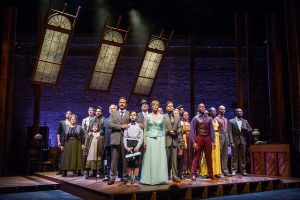 The ensemble of Ragtime. Photo by Daniel Rader

Brian Prather’s set is imaginative, and Sara Jean Tosetti’s costumes and Dave Bova’s and B.J. Jared Janas’ hair and wig designs capture the period styles and the distinctive looks of the three stories woven together in Ragtime. Chris Lee’s lighting design adds a texture to the set and costumes. Ed Chapman’s sound design balances the voices onstage and the excellent musicians in the pit.

The original Broadway production of Ragtime was an overabundance of spectacle; the Broadway revival pared the musical down to its bare essentials. Barrington Stage’s Ragtime will be remembered for its thoughtful direction and sterling performances. Ragtime runs through July 15.