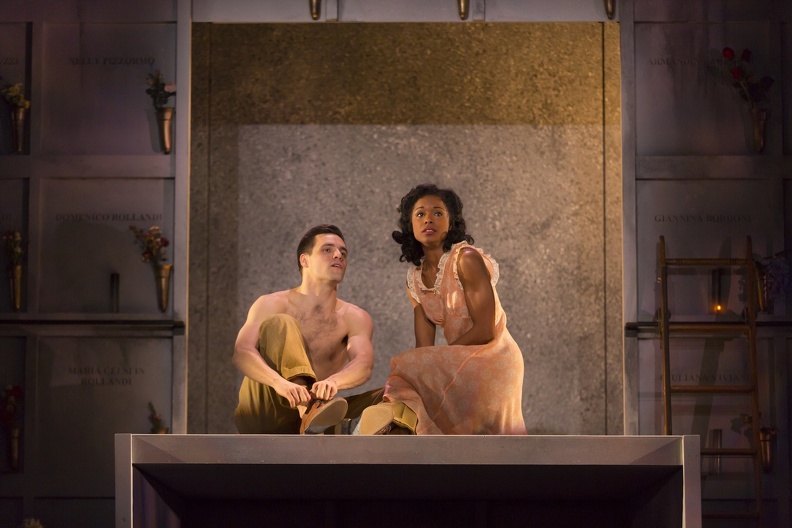 HARTFORD – I’ve been looking forward to seeing Romeo and Juliet at Hartford Stage, since it was first announced last year. Hartford Stage Artistic Director Darko Tresnjak has a way with Shakespeare, and last season’s Hamlet was thrilling. Romeo and Juliet has inspired so many treatments over the years – countless stage productions, a maginificent ballet with music by Prokofiev, over 25 operas from the likes of Gounod to Delibes; classical scores from Berlioz to Tchaikovsky, and that musical West Side Story… not to mention the film adaptation by Franco Zeffirelli that was a must-see when I was in high school. The only time I’ve ever seen Romeo and Juliet onstage was about twenty years ago, when then Hartford Stage Artistic Director Mark Lamos, also known for having a way with Shakespeare, directed the play with a then unknown Calista Flockhart as Juliet. 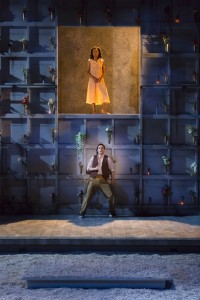 Director and set designer Tresnjak has set the tragic story of the young teens in love in late 1940s Verona, when the neorealistic films by Italian directors DeSica, Rosselini, Visconti, and Pasolini were getting notice. Tresnjak’s playing area, a series of crypts, is ingenious, and Ilona Somogyi has designed some authentic post-war costume in shades of blacks, browns, and greys, with occasional bursts of color for Juliet’s and guest’s partywear. Matthew Richard’s lighting design, Jane Shaw’s sound design, and Steve Rannkin’s fight choreography all complement Tresnjak’s cinematic staging.
It’s easy to understand why Romeo and Juliet is an enduring classic with the star-crossed lovers from families in conflict, has been played out again and again in numerous plays and movies. Some of the language, especially the famous balcony scene, is lyrical and sensuous, and Shakespeare has provided a large ensemble of characters – some good guys, some bad guys, and most caught up in situations they can’t escape. Tresnjak has well-staged and well-cast the work, and the entire ensemble is thrilling to watch. 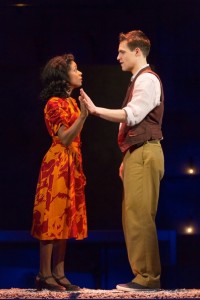 Chris Ghaffari and Kaliswa Brewster are a dazzling Romeo and Juliet – easy on the eyes, fluid of movement, and very adept with Shakespeare’s sometimes lyrical dialogue. I expect that both of them have great stage careers ahead of them. I was really impressed with Timothy D. Stickney as Juliet’s father, Kandis Chappell as Juliet’s nurse, Jonathan Louis Dent as Tybalt, Wyatt Fenner as Mercutio, and Charles Janasz as Friar Laurence. The entire company worked together maintaining Tresnjak’s paces.
For area theatregoers unfamiliar with a good Shakespeare production, this Romeo and Juliet is for you; for those theatregoers weary of some of the mediocre Shakespeare seen on some area stages, Hartford Stage’s Romeo and Juliet will restore your respect for the bounties of the Bard. I am so glad that I got to see this production, which is another fine credit to Hartford Stage.
Hartford Stage presents Romeo and Juliet by William Shakespeare Directed and designed by Darko Tresnjak Costume design by Ilona Somogyi Lighting design by Matthew Richards. Sound design by Jane Shaw. Cast: Cast: Chris Ghaffari as Romeo, Kaliswa Brewster as Juliet, Charles Janasz as Friar Laurence, Kandis Chappell as The Nurse, Wyatt Fenner as Mercutio. through March 20 . For tickets: 860-527-5151 or www.hartfordstage.org
Mark G. Auerbach studied theatre at American University and the Yale School of Drama. He’s worked for arts organizations and reported on theatre for newspapers and radio.