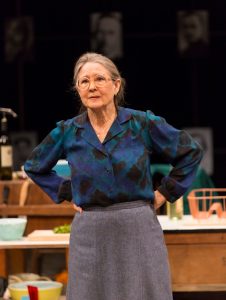 Mia Dillon as a matriarch with a past in Seder. Photo by T. Charles Erickson

Hartford Stage has nurtured and produced new plays and musicals for years. The theatre may be best known for sending A Gentleman’s Guide to Love and Murder and Anastasia to Broadway. Seder is a compelling drama, with rich characters drawn by Sarah Gancher, and punctuated by some tour-de-force performances, particularly those of Mia Dillon and Birgit Huppuch as at odds mother and daughter.

Seder, having its world premiere at Hartford Stage, is inspired by a true story. Set at the Jewish Passover table, where the seder, a ritual service and ceremonial dinner is taking place. A mother, with a mysterious past working for the AVO, the equivalent of the KGB in Hungary, and a daughter’s outrage over past atrocities collide head-on. Family secrets unravel.

For those unfamiliar with a Passover seder, the ceremony retells the exodus of the Jews from Egypt, amplified by the sharing of ritual foods, matzoh, four glasses of wine, and music. It is a Jewish holiday celebrated in the home as opposed to the synagogue, and Jews all over the world celebrate in much the same manner. 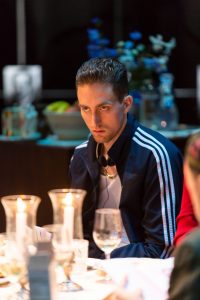 Seder is set in the backdrop of the House of Terror, which opened in Budapest in 2002, on the site which had formerly been home to the Nazi-affiliated Hungarian Arrow Cross Party during World War II , and later to the brutal AVO secret police of the Hungarian Communist Party, which controlled Hungary until the fall of the Iron Curtain. in 1989, after which young Hungarian Jews began to discover their religious identity. The House of Terror is a museum and memorial to those who suffered under the post war regimes.

The matriarch, played by Dillon, comes home to find two of her children preparing the seder. Dillon’s character is shocked to find her photo displayed among a wall of murders in the House of Terror. Her daughter and the daughter’s boy friend, an American therapist, want to see family issues put aside for the seder. However, an estranged daughter shows up for dinner, and the animosity of daughter towards mother unravels the family. As the mother’s past unfolds, the family reactions are startling, as richly conveyed by Gancher’s writing, and Elizabeth Williamson’s thoughtful direction.

Mia Dillon, last seen on an area stage as the richly humorous murderous sister in Berkshire Theatre Group’s Arsenic And Old Lace, gives a riveting performance as the matriarch, matched in dramatic intensity by Birgit Huppuch as her at-odds daughter. Julia Sirna Frest as the other daughter trying to make the perfect seder; Steven Rattazzi as her American friend, and Dustin Ingram as the brother, provide some of the humor that balances the drama. 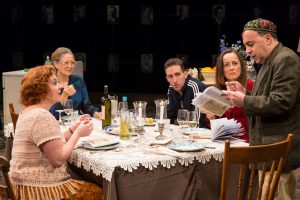 At the Seder table in in Seder. Photo by T. Charles Erickson

Nick Vaughan’s set, an apartment juxtaposed with a House of Terror exhibit is excellent, as are Ilona Somogyi’s costumes, Marcus Dilliard’s lighting, and Jane Shaw’s sound..

As a footnote, Hartford Stage has provided a wealth of information about post war Hungarian history in both its playbill and Stage Notes for Seder, which is available online at their website.  This well-crafted material helped me understand the background in which Seder is presented.