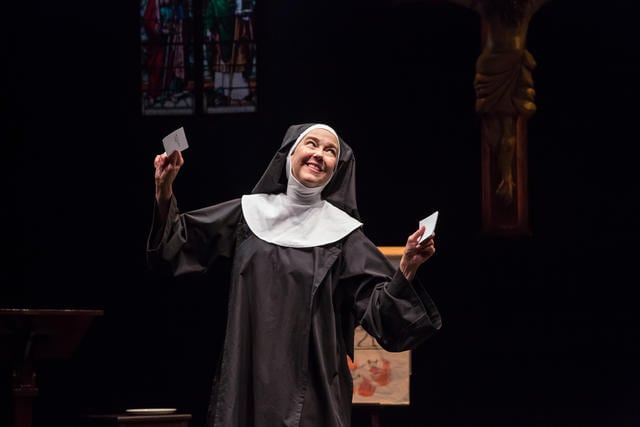 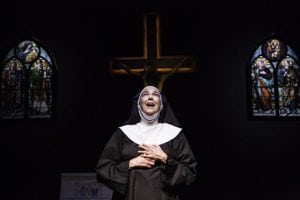 Harriet Harris in Sister Mary Ignatius Explains it All For You. Photo by Emma Rothernberg-Ware

There’s a lot of anger being directed towards the Catholic Church these days, in light of the shocking news coming from Pennsylvania. Almost forty years ago, Christopher Durang, then an emerging playwright comically took on the church in his bitingly angry, yet hilariously funny Sister Mary Ignatius Explains It All For You.  Berkshire Theatre Group ends the summer part of its 90th season with a revival of this controversial and caustic comedy.

When I first arrived at The Yale School of Drama, I was immediately attracted to the skits presented at the Yale Cabaret by Christopher Durang and Albert Innaurato, two upperclassmen who later wrote the successful comedy The Idiots Karamazov. Durang and Innaurato spoofed everything from Brecht and Weill to Mitzi Gaynor. As their careers progressed individually, Durang wrote an amazing catalogue of funny plays which took on controversial topics fused with anger. His Vanya and Sonia and Masha and Spike took home a Tony Award in 2013.

Sister Mary Ignatius Explains It All For You first appeared Off-Broadway in 1979, and later returned with the accompanying playlet,The Actor’s Nightmare  Diane Keaton played Sister Mary in a 2001 film adaptation  The show was a big hit with critics and audiences alike, and as ticket sales boomed ,so did protests–at Boston’s Charles Playhouse, Detroit’s Birmingham Theater, and New York’s Nassau Community College. The Missouri State Senate threatened to cut off funds to the Theater Project of St. Louis because it staged the play. A West Palm Beach theatre called off its production after a storm of threats. When Sister Mary Ignatius Explains It All For You played StageWest in Springfield, Catholic clergy denounced the production, and nuns and priests picketed the theatre. 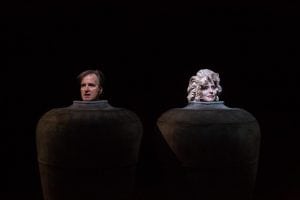 That said, the play has aged well, losing none of its laughs nor edge in the almost forty years since its premiere. the curtain raiser, The Actor’s Nightmare, is a great companion piece. An accountant, George, is thrust onstage in a play he doesn’t know, and is forced to improvise his way through what appears to be Noel Coward’s Private Lives, with a hint of Hamlet, Samuel Beckett, and A Man for All Seasons.  Matt Sullivan is brilliant as George, and the ensemble swirl around him in scenes, snippets, and lines from some major classics. Alan C. Edwards’ sets are clever, and lighting skillful, and  Hunter Kaczorowski’s costumes work humorously. Alexander Sovronsky makes his Berkshire Theatre Group debut as composer and sound designer, enhancing both plays. 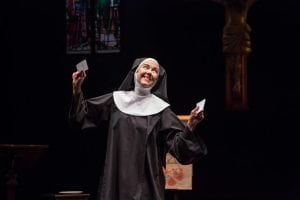 Harriet Harris in Sister Mary Ignatius Explains it All For You. Photo by Emma Rothernberg-Ware

Matthew Penn’s staging of both plays is solid, and Sister Mary Ignatius Explains It All For You requires a steady hand to keep the humor from running wild. He champions some terrific performances from the company. Harriet Harris, a joy in last season’s Arsenic and Old Lace, and earlier this season in Barrington Stage’s The Royal Family of Broadway, is a very, very funny Sister Mary, and Anna O’Donoghue shines in the roles of a frenzied stage manager, and an angry student of Sister Mary. Kudos to Levi Hall, a 4th grader in the Berkshires schools, who gives a great performance as Sister Mary’s favorite student, Thomas.

Sister Mary Ignatius Explains It All For You is zany, laugh-filled, and often angry, but the decades have mellowed its outrage and enhanced its laughs. The Catholic Church has come a long way since 1979, and yes, it has a long way to go.