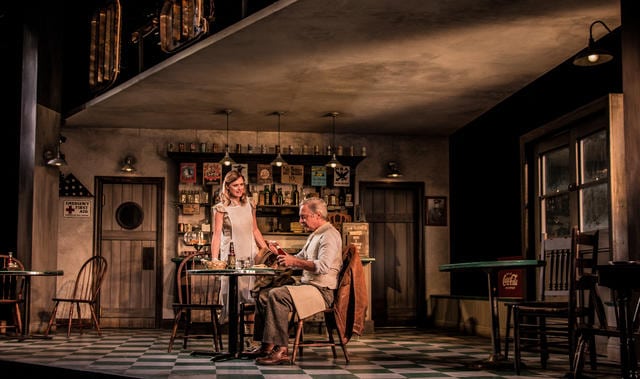 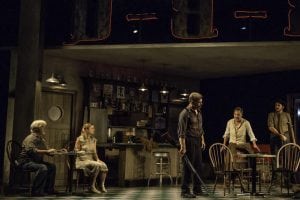 Pulitzer Prize winner Robert E. Sherwood’s rarely revived Depression-era drama The Petrified Forest takes center stage at Berkshire Theatre Group’s Fitzpatrick Main Stage in Stockbridge, and it’s worth a visit, because, frankly, they just don’t make plays like these anymore. Sherwood created a large group of disparate characters stalled in their journeys in an out-of-the-way gas station and diner in the middle of nowhere Arizona. Gabby is a waitress, who dreams of life in France, but she doesn’t have the means to get there. Alan is a disillusioned writer passing through town on the road to nowhere. Duke is a gangster on the run, with no place to hide. Boze is a low end football star with eyes for Gabby, with no way to move on down the road. 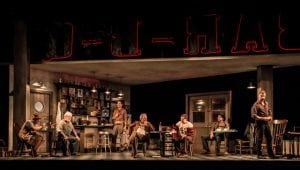 Incidentally, Berkshire Theatre Group chose to revive The Petrified Forest as part of its 90th season, because four-time Pulitzer Prize winner Robert E. Sherwood and his family had ties to Stockbridge. The Sherwood family summered in Stockbridge. Sherwood’s sister Cynthia had performed at the Fitzpatrick Main Stage, another sister, Rosamond, served on the Berkshire Theatre Festival’s Board of Directors for 36 years, and three of Sherwood’s plays had been produced in Stockbridge.

David Auburn, the Pulitzer Prize winning playwright of Proof, and last season’s Lost Lake, stages The Petrified Forest with a fine balance between comedy, drama, and thriller. The nail biting tensions of the play’s second act are really thrilling. Wilson Chin’s run-down diner set is superb, amplified by the subtle lighting designs of Daniel J. Kotlowitz and the purposely Depression drab garb by costumer Hunter Kaczorowski. Overall, this is one of the best physical productions at Berkshire Theatre Group in a while.

Sherwood’s script relies on the artistry of strong actors, and Berkshire Theatre Group has assembled an outstanding cast, many of whom are veterans of previous BTG productions. Rebecca Brooksher, so magnificent in Cat on A Hot Tin Roof and Anna Christie, is a multi-layered Gabby, the role Bette  Davis brought to the screen. Joey Collins, the powerhouse actor from BTG’s At Home At The Zoo (The Zoo Story) brings heft to the role of Ruby. And then there’s versatile actor David Adkins, a regular at BTG for over thirty years, as the destitute and disillusioned writer. This is a fully-realized star turn to be relished. 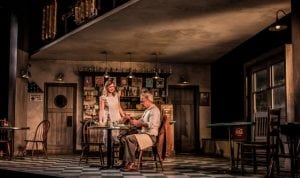 Rebecca Brooksher and David Adkins in The Petrified Forest. Photo by Wilson Chin.

All of the performances are fine. I was thrilled to see Jeremy Davidson, co-founder of the innovative Storyhorse Documentary Theatre just across the state line in New York as Duke, the Bogart-originated role. Jennifer Van Dyck is hilarious as Mrs. Chisholm, a restrained wife who is freed by the honesty of being held hostage by Duke’s gang.

A couple of notes: Save the movie version of The Petrified Forest for after you watch the stage play, because it has many spoilers, that thrill in the play’s second act.  If you’re not a fan of gunshots, they abound in Act 2, and David Adkins will also appear in BTG’s upcoming production of Naked.

I’m always thrilled to get to see a play from the past that I’m unfamiliar with, either on stage or screen. I’d never seen nor read anything of Robert E. Sherwood’s before. It was a fine revelation, and a great way to spend an August evening.