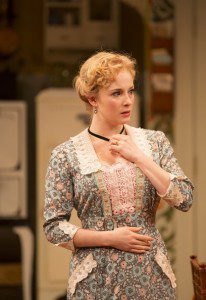 Jenny Leona as the wife who suffers a wardrobe malfunction in Steve Martin’s “The Underpants” at Hartford Stage. (Photo by T. Charles Erickson)

Wardrobe Malfunction
HARTFORD – “The Underpants”, Steve Martin’s madcap adaptation of a 1910 German farce by Carl Sternheim, has enough comic sizzle to keep audiences warm for the rest of the winter. This co-production from two of Connecticut’s major theatres, New Haven’s Long Wharf and Hartford Stage, has settled into its Hartford run through February 9. Brilliantly staged, designed, and performed, “The Underpants” is superb entertainment that jam packs multiple smiles, countless laughs, giggles, snickers, and delicious gags into 90 minutes of total fun.
At a parade honoring the king, Theo (Jeff McCarthy), a mid-level government manager is shocked and appalled, when his young wife’s bloomers inadvertently drop to the ground, giving the king and many others, a glimpse of her underwear. Wife Louise (Jenny Leona) shrugs it off as an accident, but Theo worries about losing his job over this bad family publicity. Upon returning home, a stream of gentlemen come to rent a spare room in Theo’s apartment–a pompous poet (Burke Moses), a high-strung barber (Steve Routman), and an uptight scientist (George Bartenieff,). An upstairs neighbor (Didi Conn) eavesdrops on the tenants, who all want the room to be closer to the wife they observed having a wardrobe malfunction. “The Underpants” is farce at its finest which races towards its conclusion with hilarity.
Steve Martin may be best known as stand-up comic, movie actor, and banjo player, but he’s written books, successful comedies for the stage, and terrific film scripts. Martin’s adaptation remains faithful to its source, but he infuses the play with contemporary sensibilities (despite being set in Dusseldorf in the early 20th century). Martin’s dialogue is an explosion of sexual innuendos, double entendres, and fast-paced wit. Gordon Edelstein’s staging, and Tim Acito’s brilliant fight staging and ensemble choreography, if you will, bring every ounce of zing and zany comedy to the surface without ever becoming overdone.
Lee Savage’s set design is functional with the requisite slamming doors for farce and multiple playing areas; Jess Goldstein’s costumes are appropriately period with some funny flourishes. Robert Wierzel’s lighting designs and David Budries sound designs are great. 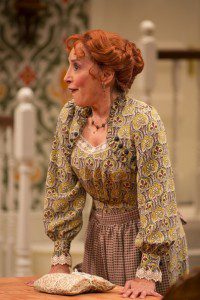 Didi Conn as an eavesdropping neighbor in Steve Martin’s “The Underpants” at Hartford Stage. (Photo by T. Charles Erickson.)

“The Underpants” is very much the ensemble play, and all of the actors bring out the humor in their characters and Martin’s writing with split-second timing. Jeff McCarthy, Burke Moses, Steve Routman and Didi Conn come from the world of musical theatre, and they navigate Martin’s dialogue, Edelstein’s direction, and Acito’s staging with musicality. George Bartenieff is a masterful character actor, and Jenny Leona, a recent Juilliard grad, sparkles.
“The Underpants” is well-written, staged with a beat, performed with finesse, ably-designed, and downright funny. Don’t miss it. The show runs through February 9.