WESTFIELD-For more than 50 years, Stanley Park has been a “testing ground” for companies that specialize in rose varietals.
On Thursday morning, Paul Kuczynski, who serves as greenhouse and horticulture coordinator, and Robert Salvini, horticulture technician, were checking on the latest Star® Roses that recently arrived from the Star® Roses and Plants/Conard-Pyle Co. 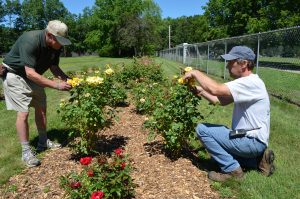 Paul Kuczynski and Robert Salvini check the condition of the Yellow Floribunda test roses at Stanley Park that recently arrived from California.

The two testing rows are secluded and adjacent to the park’s office and maintenance area. Each rose varietal being tested includes five plants that are grouped together.
“The program started in 1965 with the All-American Rose Selection,” said Kuczynski, who is now entering his 43rd year at the park.
Since 2012, the Star® Roses and Plants/Conard-Pyle Co. has been using the same test rows for its rigorous trialing process. The company also operates testing facilities on both the East and West coasts, and its roses must perform well on its own roots, in containers, as well as in the garden. For Kuczynski and Salvini, once the roses are planted for a two-year trial span – they will check them twice during the season for the company for a variety of issues – from re-blooming quality to black spots. 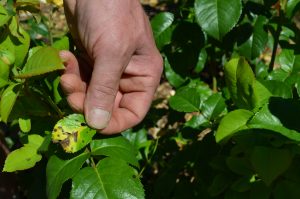 Paul Kuczynski singles out a Yellow Hybrid Tea Rose leaf that has black spots. The rose bush is among several that recently arrived from California as part of a two-year testing process at Stanley Park.

“We examine the roses for several reasons, including for black spot resistance, disease resistance, as well as mildew resistance,” said Kuczynski.
Downy mildew, a disease that is caused by a fungus-like organism that is spread from plant to plant by airborne spores, is also a key element that both men check for the company.
Since each row is trialed for two years, there are always new plants arriving each spring. Once the trial is complete and final results have been submitted to the company, the rose varietals are destroyed.
The company typically has 12 to 15 potential new releases that are tested each year and following the results of nationwide trials, five to seven new roses make it to the market.
For the 2017 test roses at Stanley Park, varieties include Yellow Floribunda, Climbing Roses, Grandiflora Roses, and Hybrid Tea Roses.
“This year’s test roses arrived in early May from growers in California,” said Kuczynski, noting that the 2016 test roses are different varietals.
Stanley Park is an ideal location for the test roses since they are also tested for being “winter hardy.”
While both men relish special projects including the test roses, their passion lies in beautifying the park grounds – and educating the public about the jewel of the city.
“I especially like the interaction with people,” said Salvini, who can be found mowing on Thursdays and at other times, busy with the upkeep of the rose garden and with general plantings and re-plantings.
Kuczynski echoed those sentiments.
“I enjoy interacting with people and seeing them enjoy the fruits of our labor,” said Kuczynski. “You have an opportunity to get to know people who return year after year to the park.”