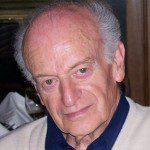 WESTFIELD – Samuel C. “Sam” Genovese, 85, of Westfield died January 23, 2013, at the Soldiers’ Home in Holyoke. Born May 30, 1927, in Westfield, he was the son of the late Severino and Jane (Italiano) Genovese and the brother of Ann Cooley and Florence Snyder, and the late Ruby Mulvenna and Theresa Genovese.
Sam grew up in Cowles Court in Westfield and delighted in telling stories of his friends in that lively Italian-American neighborhood. He attended St. Mary’s Elementary School and Westfield High School, graduating in the Class of 1943. For many years, he was one of the organizers of the class of 1943’s class reunions. Sam attended the Massachusetts Maritime Academy but left before graduating to enlist in the Navy during World War II. He served aboard the U.S.S. Missouri, where he crossed both the Equator and the Arctic Circle. He was proud of his Navy service and kept in touch with his comrades decades after leaving the Navy.
He married his high school sweetheart, Margaret “Peg” (Lynch) Genovese, in 1948. They loved dancing and were square dancers and elegant ballroom dancers. They also shared an interest in the history of Westfield, and Sam did extensive research that resulted in the 1999 granting of a Purple Heart medal to Lt. William H. Kane, a World War I hero from Westfield. While working and raising a family, Sam went back to college and graduated with a bachelor of business administration degree from American International College, where he was president of Alpha Sigma Lambda, a National Academic Honor Society for night-school students. He took graduate courses in business at the University of Connecticut and Westfield State College, where he earned a business administrator’s certificate.
From 1966 until 1979, he was part owner and manager of The Men’s Shop in Westfield, a clothing store co-founded by his father. From 1979 until 1982, he was assistant business manager for the Westfield School System. From 1983 until 2007, he was director of finance and data systems for WestMass ElderCare, Inc. in Holyoke. He retired at the age of 80. He served three terms as president of the Financial Managers Group of the Massachusetts Executive Office of Elder Affairs. In Westfield, Sam served on the board of directors of the Westfield Kiwanis Club and the Westfield Chamber of Commerce. He was a corporator of the Boys & Girls Club of Greater Westfield and the Woronoco Savings Bank. A self-taught carpenter, he built the family home in Westfield in the early 1950s, adding onto the house several times, making it a beautiful home. He and his brothers-in-law also built two cottages in South Wellfleet, Cape Cod. He ran six miles every other day for many years. In the last few years of his life, he still did six miles, but at a walk, not a run. His primary focus was always on his family. He is survived by his beloved wife of 64 years, Peg. He also leaves four children, Margaret Carter of Herndon, VA, and her husband, Thomas, Christine Hagan of Easthampton and her husband, Daniel, Samuel J. Genovese of Westfield, and Daniel L. Genovese of Westfield, and his wife, Nancy and four wonderful grandchildren, Daniel C. Hagan, Esq. of Southampton, Abby and Molly Genovese of Westfield, and Amanda Carter of Redmond, WA.
The funeral for Sam will be held on Saturday, February 2nd at 1:00 p.m. in St. Mary’s Church. Burial will follow in St. Mary’s Cemetery. Calling hours will be held before the service on Saturday at the Firtion-Adams Funeral Service, 76 Broad Street, Westfield from 10:30 a.m. until 12:30 p.m.
In lieu of flowers, donations may be made in Sam’s memory to the Soldiers’ Home, 110 Cherry Street, Holyoke, MA 01040, Tree of Life.
firtionadams.com