SOUTHWICK – Launched in mid-January, the Second Chance Breakfast offered to ninth through twelfth graders at the Southwick Regional High School has turned into a major success.

According to Diane Lemieux, a food services worker who has been running the Second Chance Breakfast, previously she would only have three or four students stopping by.

However, once word got out that there would be an alternative for students to have breakfast in the morning, the number has skyrocketed. Lemieux now averages 40 to 50 students each morning. 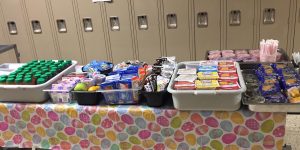 The Second Chance Breakfast offers a variety of snacks and refreshments for ninth through twelve graders to indulge in. (Photo by Greg Fitzpatrick)

The short time slot has seemed to be a great opportunity for the students to satisfy their hunger between their first and second period classes.

“This seems to be the perfect time for them,” said Lemieux.

While Lemieux typically has handled the Second Chance Breakfast by herself, fellow food services worker Aimee Ronzoni was also able to help Lemieux with the operation on Friday.

Both workers acknowledged that bagels and pop tarts were clear favorites with the students, as well as their fruit smoothies.

In order to attract as many ninth through twelfth graders as possible, the Second Chance Breakfast table is set up right in the middle of the hallway.

“I think the location is just easy for them,” said Lemieux.

Lemieux also pointed out that a future plan is to put another table in another area of the high school for the students that rarely travel down the hallway where the current table is.