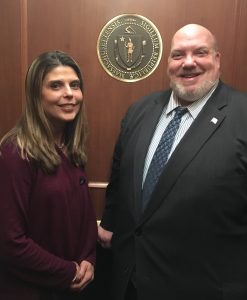 WESTFIELD – State Senator Don Humason announced today that he has recently appointed a new staff member to work in his District office. Michelle Moriarty, of Holyoke, began work on October 10th as the Senator’s new Scheduler and Constituent Services Aide.

Michelle is a long time resident of the City of Holyoke, where she raised her three children with her husband Matt. A Holyoke High School graduate, Michelle studied at both Holyoke Community College and Westfield State University, earning a Bachelor’s degree in Criminal Justice.

In her role as Scheduler, Michelle will primarily be managing the Senator’s day-to-day schedule, which includes coordinating meetings with constituents, managing a busy legislative calendar, and more. She will also be working with Humason and his staff to answer and resolve constituent cases.

“I was excited by the opportunity to join Senator Humason’s team, and I look forward to helping him serve the families he represents as best he can,” Michelle said of her new position.

Michelle joins Senator Humason’s staff with over twenty years of public service experience. After attaining her degree, Michelle served as a police officer in the City of Northampton for eight and a half years. Most recently, she worked as a Lease Enforcement Officer for Northampton’s Housing Authority, where she liaised between residents, social service organizations, and state agencies.

“Michelle’s experience and professionalism will be a great asset to both me and the constituents of the 11 cities and towns I represent,” said Senator Humason. “Scheduling is one of the more time-intensive, fast-paced responsibilities in my office and Michelle has already proven she’s more than up to the task. I know she will do a great job.”

Michelle will also represent the Senator at events around the district as necessary and assist constituents who encounter issues with state agencies or have questions for Senator Humason.

Senator Humason represents the 2nd Hampden and Hampshire District, which consists of the cities of Agawam, Easthampton, Holyoke, Westfield, and parts of the city of Chicopee; and the towns of Granville, Montgomery, Russell, Southampton, Southwick and Tolland.