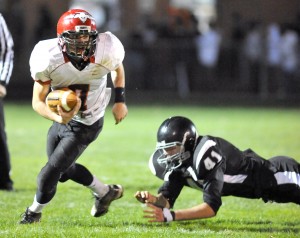 WESTFIELD – It is a senior night unlike any other for the Westfield High School football team.
This season, the Westfield Bombers have had games suspended due to lightning, postponed because of rain, and most recently, delayed two weeks when an unprecedented pre-Halloween snowstorm downed trees and knocked out power all throughout the northeast.
Even the Thanksgiving Day game has been changed.
On Thursday, Westfield (4-4, 3-3 AA) will host the Central Golden Eagles (7-2, 5-0) at Bullens Field in a senior night battle ripe with playoff implications. Kickoff is slated for an earlier start time of 6 p.m.
Central, which boasts elite running back Sacoy Malone (16 TDs, 1455 yards) and quarterback Cody Williams (56-of-98 passing, 13 TDs, 2 INTs), is on a roll. The Golden Eagles have won seven straight after losing their first two games of the season to Putnam and Everett.
Westfield opened its season 3-1 and then lost four straight before defeating Northampton. It was a bit of redemption for the Bombers who were knocked off by the winless Blue Devils each of the last two seasons.
Now, Westfield must take care of business in its last two games, and hope things fall into place to earn a playoff berth.
Four teams qualify from each of four divisions in Western Massachusetts. Division I is made up of Westfield, Central, Minnechaug, Longmeadow, Agawam, Chicopee, Chicopee Comp, Holyoke, Northampton, and West Springfield.
All league champions automatically qualify; the remaining teams are selected through a power ranking process that is almost as challenging as trying to figure out college football’s Bowl Championship Series formula.
“It is complicated,” Massachusetts Interscholastic Athletic Association spokesperson Paul Wetzel said. “But it is a much more precise scoring system (than the BCS).”
In the current system, WMass football teams are awarded 10 points for wins in their own division with 2 points subtracted from the win for every division down that it plays. If a team beats an opponent, it also received two points for every win that opponent had throughout the season. A tie is worth one. The power ranking is then divided by the total number of teams played by that school.
If there is still a tie, the tiebreaker goes to head-to-head, record against common opponents, and a coin flip.
Westfield is on the bubble for one of the last two spots.
“Central is another amazing football team,” Westfield coach Bill Moore said. “Hopefully, we have progressed to the point where we can squeak out a win. We’re a much better than we were a month ago.”
Moore credited the continued solid play of his seniors, and the improvement along the offensive and defensive lines.