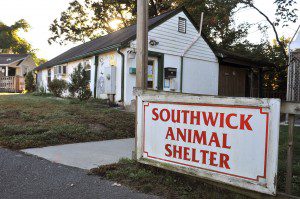 SOUTHWICK — Construction is expected to begin soon on a new animal shelter. And Tracy Root, Southwick’sanimal control officer, can hardly wait.
“We’re chomping at the bits to get things started,” she said.
Southwick resident and animal lover Bob Polverari has donated funds to the town for the purpose of constructing a new, larger animal shelter. This is the second such donation he has made to the town. Several years ago he has assisted the animal control department through the donation of panels to essentially replace the chain fencing that once separated the individual dog kennels. Root noted that the chain fences often gave way to fighting between the dogs. Polverari even assisted with the installation of the panels.
According to Root, Polverari contacted her about making this second donation several months ago, commenting about the state of the existing animal shelter in comparison to other town buildings — namely the town hall, police station and fire house. The new building will be situated across from the existing one.
The donation must be accepted by annual town meeting voters later this month; pending that, construction can begin. Root said the plans for the new building have been created, and customized to suit the needs of the town’s animal control department.
“It’s going to be a lot of fun watching them put this [building] up,” she said.
The need for a new shelter continues to grow, as a lack of space and less-than-ideal conditions make it difficult for the town’s needs to be met. The existing shelter operates in approximately 300 square feet of space along with three separate storage sheds that contain supplies and equipment. The new facility will feature 2,000 square feet that will include ample storage space.
“It will be really nice to have everything under one roof,” Root said.
There are eight kennels currently for dogs, and 14 for cats. This is not enough, according to Root. The new building will alleviate the issue with more kennels, as well as a large room that could be used for additional kennels as needed and for space where cats and kittens can play. Space will also be available to allow the animal control department to offer classes and hold events.
There will be a smaller quiet room for mother cats and their newborn kittens in the new building. In addition, there will be a specific quarantine area to keep sick animals separate from the others; currently there is none. A carport will be installed outside the building, as well, for safer drop off and pick up of animals, specifically dogs.
“This is going to be great for the shelter,” Root said, noting that the new building will also feature administrative office space. She plans to expand the hours the shelter is open, too, with the help of volunteers.