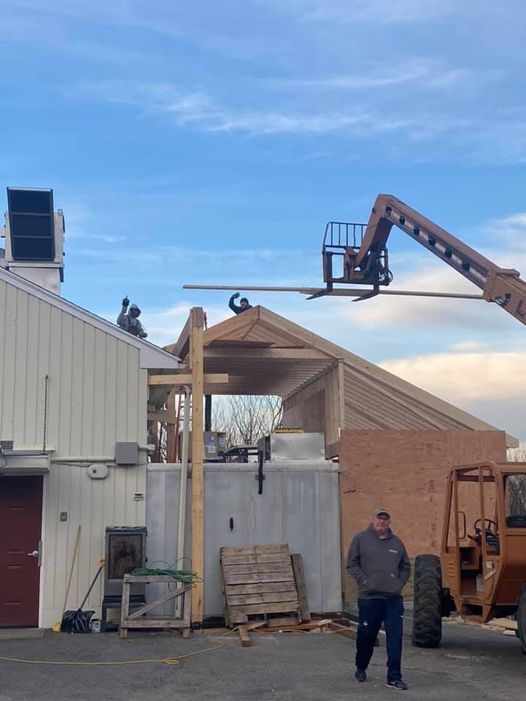 WESTFIELD – The next phase of the Skyline Beer Co. owners’ dreams is underway with the expansion of its patio with scenic views of farmland below. 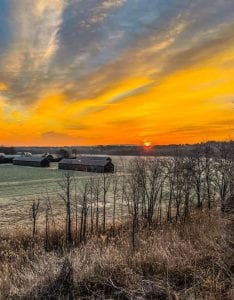 The sunrise view from the patio at Skyline Beer Co., which is being expanded and slated for opening this spring. (LISA LAFRENIERE PHOTO)

Owners Lisa Lafreniere, Daniel Osella and Dana Bishop purchased the former Fowler Farms property, which they refurbished and opened in the fall of 2019, to bring their vision to life. Skyline offers craft beer made on the premises as well as a menu created using as many locally sourced products as possible. Lafreniere and Bishop head up the brewing while chef Osella creates the food. Pairing food and beer in a relaxed atmosphere was always their goal since first opening as a homebrew shop and café inside the Westfield River Brewing building, then moving to its former downtown location and to its new and likely forever home at 98 Southwick Road.

“It feels awesome to see our vision for the back coming together, it is basically the whole reason we bought the property,” Lafreniere said. “We had decorative concrete poured with a really cool design, we added a fourth walk-in cooler for beer storage, and a full outside bar including 12 taps, a bathroom — all covered – and we are also rebuilding the pergola that used to be there.”

The property backs up to wetlands and Skyline is enhancing the farm view with the addition of gardens.

“We got permission from the conservation commission to put in rain gardens and plant juniper or other low growing plants that also can feed wildlife at the top portion of the hill and then we plan on installing welded wooden wire fencing around it all to allow a full view below,” Lafreniere said. “We are hoping to have it completely ready by April 1 but still have all the details to build and give it that ‘Skyline vibe.’ We have a couple of different people working on it, but we left this one to the pros.” 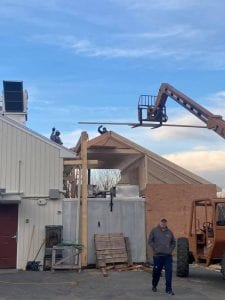 The Skyline “vibe” is what Lafreniere calls “chill.” Rustic touches, such as locally sourced and reclaimed wood, help create the casual atmosphere inside, which she is replicating outside. When COVID first hit, Lafreniere was concerned that Skyline would have to close, but instead it has continued to remain open with help from its beer garden, which was quickly created when outdoor dining was allowed. But even with the beer garden, revenue is down now that it’s winter.

“The beer garden was our saving grace through the summer and now as we are facing a capacity of only 25 people inside, take out and beer sales to go have naturally gone up but our profits on canned beer are extremely small compared to selling by the pint,” Lafreniere said. “When we wrote our business plan and came up with the model, we never pictured this. The canner we bought was not meant to blast cans out, it is a one-person manual canner and we pay quite a bit in labor and cans and only sell if for less than half the amount as compared to selling by the pint.”

Lafreniere said while the pandemic has certainly affected her business, it was a small setback for her expansion.

“The only way that COVID has really affected the expansion is that we would have done it earlier, but our meetings with the city and some other things got pushed back,” Lafreniere said. “I believe that adapting for us and the crew was a bit easier for us due to the fact that we are so new and flexible that we are ready to do whatever it takes as far as being creative and innovative.”

Lafreniere said she is cautiously optimistic for the coming year.

“We are more than happy that our doors are open, and that we have work for our employees, so I try not to get caught up in anything but that these days,” she said. “It’s a bit early to get too excited about 2021 but we are trying to be optimistic about it. Being in the industry, one of the things that I personally miss the most is beer festivals. When we bought this place, we pictured having big food and beer parties, music, car shows, beer festivals, that is a huge part of the fun as well as the drive of this industry for me personally. There is nothing better than a good beer fest, and I miss those days and I have no idea when we will see anything like that again.”

Lafreniere said when the world is ready, so is Skyline.

“We have our brewing system pretty dialed-in now that we have been brewing for over a year on it. We still get excited for new beers and styles, we have some really fun stuff coming out even in the next couple of months. I wrote a New England IPA recipe for my dogs called ‘Vic and Sim’ that will be coming out very soon, Dana and I just wrote a Maibock recipe which is a traditional German beer meant for the coming of spring. It has a clean and malty flavor profile and will be around 7% ABV and used all German ingredients and we let it sit in the tanks until it had cleared up.

“We are also about to release our West Coast DIPA called Shaver of Love which had a great response, so we brewed it a second time almost right away. We have a new kettle sour which will have some darker fruits added like plum, black current and apricot. We will also continue to offer our beer and whiskey dinners and also are offering them “to-go” for people who are trying to stay quarantined but also don’t want to miss out.”

For his part, Osella is creating new menu items to pair with the new brews, including putting to use his new smoker that was repurposed from a two-door baker’s proof box.  Osella is planning Farm Share specials with local produce, increasing its pretzel and flatbread offerings hosting more beer and whiskey dinners and increasing catering and family and individual meal options.