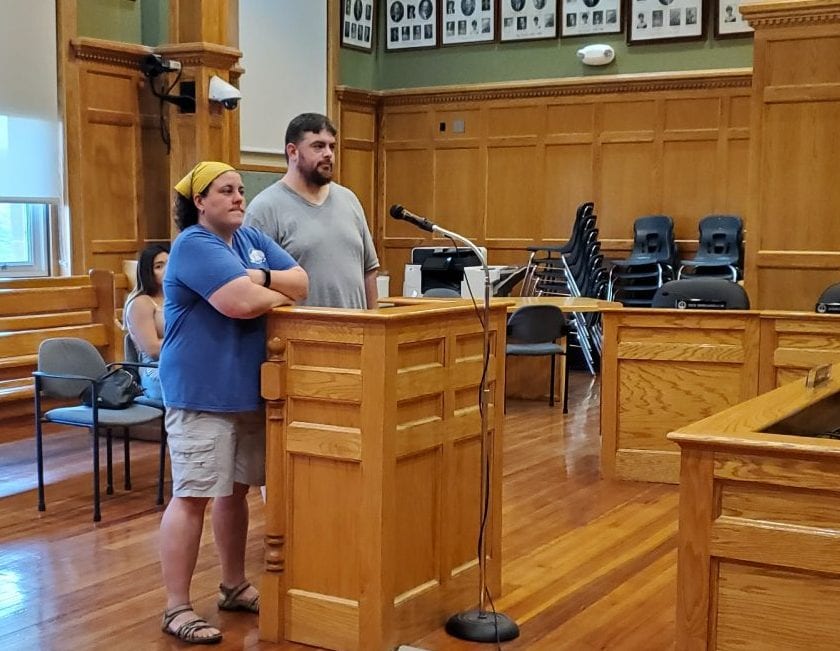 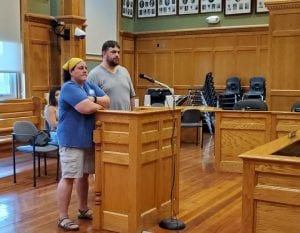 Lisa Pac (left) and Daniel Osella, owners of Skyline Beer Company, at their public hearing before the License Commission. (Photo by Peter Currier)

WESTFIELD- Skyline Beer Company was granted a change in LLC managers, change of ownership interest, and a change in location during Monday evening’s License Commission meeting in the City Council Chambers.

Owners Lisa Pac and Daniel Osella stood before the commission to argue in favor of several changes to their business, the most significant being their location. They will now go from their current location at 124 Elm St. to 98 Southwick Road.

The third co-owner, Dana Bishop, was not able to attend the hearing.

The new location is a four-room brewery with a walk-in cooler for beer and another cooler for the kitchen. It will also feature outdoor seating for 25 to 30 people on the patio and gazebo area of the property. There will also be an area outside for games such as horseshoes or cornhole.

In order to go through with the changes, Skyline Beer Company had to be approved for a Pub Brewers License, of which there are just five others in Massachusetts. In order to sell beer from other local brewery, they would need a second license.

The commission’s only concern was the distinction between Skyline Beer and beer from other breweries. Specifically, they wanted to know how each product would be sold. Commissioner Alice Dawicki’s concern was that people may leave the property with other beer that is not meant for retail sale.

“Our beer is packaged up in cans. When it comes off we package a certain percentage of it. We have eight taps essentially that are our taps on one side of the wall,” said Pac.

She added that there would be eight taps in another part of the building that would be meant for other beers not made by Skyline. The only retail sales of beer would be for Skyline products.

Pac and Osella also applied for an entertainment license for their outdoor seating and inside the establishment. Pac noted that any entertainment in the outdoor section would be mostly acoustic music played by one or two people. She added that the outdoor portion of the brewery would likely not be open until next spring.

When asked by Commission Chair Christopher Mowatt about the outdoor hours in relation to the music, Pac said that on weekdays they will be open until 9 p.m., and on weekends they would close at 10 p.m.. She added that there would be no excessively loud music or any sort of PA system outside.

Ward 5 City Council Leslie LeFebvre spoke in favor of the changes during the public comment section of the meeting. Nobody in the audience spoke in opposition of them.

Peter Currier can be reached at [email protected].