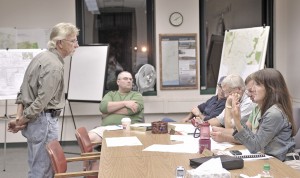 Mike Noble, left, listens to members of the Southwick Planning Board during a discussion of a solar project that is located on a mountain top in the rear of his property near 187 College Highway. Noble claimed the clearing of approximately 10-acres of land has contributed to water related problems on his property which is below the 7-acre project. (Photo by Frederick Gore)

SOUTHWICK – The Southwick Planning Board is waiting to approve changes to a solar project behind Big Y until a site visit takes place.
Matthew Puntin of SKS Design, designer of the seven-acre solar array, met with the board this week to dicsuss changes to the stormwater management plan following water damage done to neighbors of the property last month.
“This is in response to the flash storm we had Aug. 13,” Puntin said. 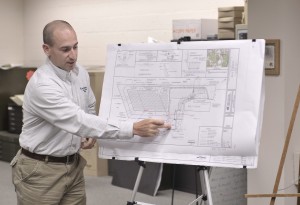 Matthew D. Puntin, an engineer from S-K Design Group of Pittsfield, points out an additional drainage system that could be used to help in the distribution of water during heavy rainfalls to members of the Southwick Planning Board this week. Residents living below the mountain-top solar farm located at 187 College Highway claim they received water damage to their property during a heavy mid August rain due to the clearing of approximately 10-acres of land where the solar farm is to be constructed. (Photo by Frederick Gore)

Two homes, one owned by Michael Noble and the other by Martha Baillargeon, suffered damage when water from the project ran onto their properties during the heavy rainstorm. Noble’s property was damaged both in the front and back yard, and Baillargeon’s gravel driveway washed out onto College Highway. Both residents attended this week’s planning board meeting to hear what Puntin had to say.
“We’re proposing an additional swale for an extra level of protection,” said Puntin of the area near Noble’s house.
Puntin proposed another trench to keep water from Baillargeon’s home. The trench proposed, however, is shorter than Baillargeon’s property and Planning Board Vice Chairperson Roz Terry wondered how that would keep the water away. 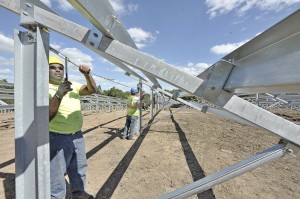 Jeremy Bobo, foreground, of Synergy Solar, and Tony Paton, background, of Elm Electric, use heavy steel cables to square a solar panel mount at the new seven-acre solar farm near the Big-Y supermarket in Southwick on Wednesday. (Photo by Frederick Gore)

Terry said if the trench was not long enough, she envisioned the water finding a new place to run off. Puntin said he believed the new trench – plus the existing tench that runs the length of the solar project property – would hold water.
Baillargeon said she was concerned it would not hold, and also questioned what would happen in the winter when the trenches are frozen and water runs right over them.
During the discussion, everyone agreed there had been several water concerns prior to the solar project. Terry stressed that it’s not Puntin’s job to fix all the issues.
“Keep in mind they don’t have to make it better than it was, they just can’t make it worse,” she said.
Baillargeon and Noble said the problem is that it is worse. Baillargeon said the water problems go back to 2003 when the property owner was planning to create a residential subdivision there and began clearing trees from the area. Baillargeon said in addition to her concerns for her own property, she was worried about the wooded area next to her where the state highway department recently installed a rock barrier along College Highway.
“It was never like this before,” said Noble following the wash-out. “It was never this bad. They cleared out the woods and the water came right through my property – my backyard is destroyed.”
Puntin said during his original presentation to the planning board that most of the parcel is wooded and there would be clearing of much of the land, leaving a buffer of wooded area between the installation and residences to the south.
“Under the panels, vegetation will continue to grow,” said Puntin. “We’re clearing trees but leaving brush.”
Currently, there is no vegetation at the site. The panel frames are already installed and the land underneath was cleared and covered in mulch.
Water was to run off the panels under adjacent panels, and a five-foot wide by three-foot deep stone trench would surround the perimeter of the installation. A six-foot chain link fence was also planned around the panels.
Puntin said the trench would act as a detention basin.
“This allows the water to perc back into the ground,” he said.
Workers were connecting string lines to the metal frames this week and said the 1.8 megawatt array would include nearly 6,000 panels, which would be delivered later this month and take about two weeks to install.
Baillargeon said at the time of the wash-out that the town and representatives of the project acted quickly to remedy the situation short-term.