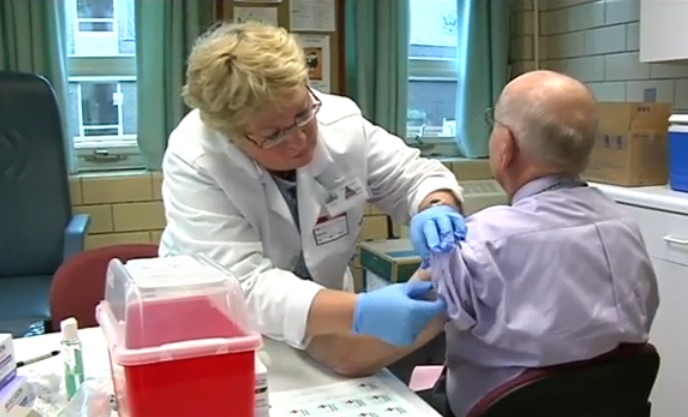 HOLYOKE – The Soldiers’ Home in Holyoke will hold a flu vaccine clinic for veterans Wednesday and October 15 from 9 a.m. – 2 p.m. at the facility’s outpatient clinic at 110 Cherry St.
Spouses accompanying veterans will also be able to obtain vaccinations under the same payment criteria. People covered under Medicare Part B can obtain vaccinations for free. Some health insurance companies also pay for such vaccinations.
Anyone who does not have such coverage will be charged $30 for flu shots.
Check with insurance carriers for eligibility; some carriers do not pay for the vaccines. Insurance cards must be presented at the clinic.
It takes about 10 days for a person who has been vaccinated to develop effective resistance against the flu.
More than 6.6 million illnesses were prevented in the 2013 flu season due to the flu vaccine.
Typically, flu season in New England begins in November, increases in January, and peaks in February or early March.
Despite the benefits of vaccination and the potential severity of the flu, the federal Centers for Disease Control and Prevention reports that fewer than half of all Americans receive the vaccination in a typical flu season.
While a yearly flu immunization is recommended for everyone over age six months, fewer than half of Americans received a flu shot last year, according to the federal Centers for Disease Control and Prevention.
Massachusetts has the fourth highest flu vaccination rate in the country, but it’s still very low: 53 percent of residents had a flu shot during last year’s season compared to a national average of 46 percent. That’s a drop from 58 percent of state residents who got the shot during the 2012 to 2013 season.
The flu resulted in 381,000 hospitalizations across the nation last year, according to a December report from the CDC.
For more information about the flu, visit www.mass.gov/flu.
Established in 1952, the Soldiers’ Home in Holyoke is a state operated and fully accredited health care facility serving veterans of Massachusetts. The Soldiers’ Home offers health care, including full-time residential accommodations, an on-site dental clinic, a veterans’ assistance center, and a multiservice outpatient department.