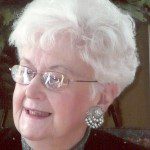 WESTFIELD – Sophie A. “Zosh” (Maziarz) Rumanowski, daughter of Frank J. Maziarz and Ann Janik Maziarz, and beloved wife of Lt’ Col. Edward J. Rumanowski (deceased), died at home on September 6, 2012 of complications from cancer.
Zosh was the mother of Kathleen Loomis of Westfield, John Roman of Lewes, Delaware and Karen Cox (husband David Cox) of York, Maine. She was the beloved grandmother of Rebecca Loomis Signet (husband Jeff Signet) of Feeding Hills, Andrea Loomis of Westfield, Natalie Cox Pavlova (husband Dimitar Pavlov) of Kittery, Maine, and Nathan Cox of York, Maine. She was the great grandmother of Braydon and Sophie Signet of Feeding Hills. She is survived by a sister-in-law, Helene Rumanowski of Chicopee and eleven nieces and nephews.
A native of Chicopee, Massachusetts, Zosh was a graduate of Chicopee High School. She was a charter member of the Neewah Glee Club, known for its coral accomplishments and well received group concerts. This entourage of vocally gifted high school friends met monthly for nearly 40 years, delighting in both evening-at-home rehearsals and public appearances.
Zosh married her high school sweetheart on February 15, 1943. Throughout her husband’s career, she was considered the “perfect military wife,” attentive to the demands of their professional life, while always attuned to the challenges and needs of their growing family. She served on a number of Officer’s Wives committees and was a volunteer for the American Red Cross’ blood bank drives for many years. Her optimism, charisma and love of life was the magnet that drew so many people to her as lifelong friends.
Calling hours will be Sunday, September 9, 2012 from 3:00-6:00 p.m. at the Firtion-Adams Funeral Home, 76 Broad Street, Westfield. The funeral will be Monday, September 10, 2012 at 9:00 a.m. from Firtion-Adams Funeral Home followed by a Liturgy of Christian Burial in Holy Trinity Church, 335 Elm Street, Westfield at 10:00 a.m. Burial will be at the Massachusetts National Cemetery, Bourne, Massachusetts on Cape Cod.
In lieu of flowers, contributions can be made to the Noble Visiting Nurse and Hospice Services, 77 Mill Street, Westfield, Massachusetts, 01085.
firtionadams.com