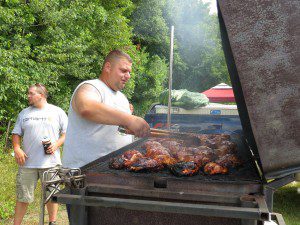 SOUTHWICK – It’s that time of year again, when local BBQ and chili enthusiasts bring their best to the Grill’n Daze event. But this year, there will be so much more.
Now in its eighth year, the local event is changing to accommodate all different kinds of activities, forming the first ever Southwick Days. It will feature three days of fun —tomorrow-Sunday – according to Ellen Miles of the Southwick Rotary Club, which will put on the event at the Southwick Recreation Center. 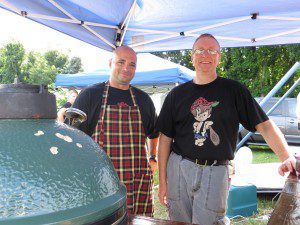 Robert Howe and John Oates of team Bam Bams BBQ placed in the top three in three out of four categories at the Southwick Rotary’s Grill’n Daze BBQ and Chili competition in 2013. (File photo by Hope E. Tremblay)

There will be a family-friendly carnival held each of the three days—on Friday from 5-10 p.m,. Saturday from 3-10 p.m., and on Sunday from 12-6 p.m.
Friday will also feature the Charlie Galvin Band at 6:30 p.m., followed by a fireworks display organized by the Southwick Parks and Recreation Commission.
On Saturday, Family Day, at 3 p.m. the Southwick Cultural Council will host The Nields, a world renowned Northampton-based sister duo that produces educational children’s music. This second day of the event will also feature a Battle of the Bands at 6 p.m. 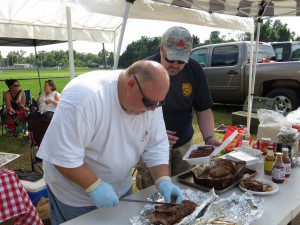 Miles said the club is still seeking local area bands to participate in the battle. Those interested are encouraged to contact Rotary member Bob Fox at (413) 579-4585 or [email protected] Miles said this activity simply gives local area musicians the chance to showcase their talent, and maybe even win a prize in the process.
The final day of the event is packed full of activities beyond the carnival.
The Westfield Wheelmen Vintage Baseball group will play a game for spectators, but according to the rules that were in place in 1861. This will be followed by the music of the Rick Badowski Blues Band, and later the classic rock stylings of Jack & His Guitar.
The annual Grill’n Daze BBQ and Chili Cook-off will also take place on Sunday. Contestants will be able to enter poultry (judging at 3 p.m.), pork (judging at 4 p.m.), and beef (judging at 5 p.m.) BBQ categories. First, second and third place prizes of $300, $200 and $100, respectively, will be doled out, in addition to a special prize for the best decorated booth.
The chili cook-off will also see first, second and third place prizes awarded—$150, $100 and $50, respectively. Judging for this competition will be held at 2 pm.
In addition, Miles said, a BBQ grill and smoker will be raffled off.
For more information about the Southwick Days event, visit www.clubrunner.ca/Portal/Home.aspx?accountid=6931