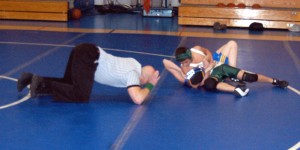 Southwick-Tolland Regional 7th grader Eddie Martinez wrestles his Pathfinder opponent to the ground in an exhibition match at 106 pounds Wednesday. Martinez also won in a varsity match at 112 with a first-period pin. (Photo by Chris Putz)

THORNDIKE – The Southwick-Tolland Regional wrestling team has been known for its past domination under longtime head coach Ed Martinez. But during the last few years, the program has been forced to restock with a youthful vengeance.
That talent was on display again Wednesday in Southwick’s 48-36 win over host Pathfinder.
Stephen Thibault (:15 pin), Eddie Martinez (1:26 pin), Trevor Bengston (2:23 pin), Tyler Dittrich (1:29 pin), Gabe Degray (:27 pin), Drew Augustino (:27 pin), Blake Tetrault (4:41 pin) all won by pin for Southwick, and Rams’ Brayden Tingley won by forfeit.
Thibault, now an eighth grader, quickly showed why he is the state’s youngest champ, dispatching Amber Mitchell in 15 seconds. Martinez, the coach’s son, followed suit shortly thereafter. Like his teammate, he is hoping to catch fire as a seventh grader.
There are now a half-dozen middle school student-athletes on the Southwick varsity wrestling team.
“We have a lot of room for improvement,” coach Martinez said. “Our wrestlers are going to have to work hard, stay basic, and in a couple of years, hopefully, we will have a decent group.”
After posting a 2-1 record in a weekend tournament, Southwick improved to 3-1.
In other matches, Westfield wrestled Amherst at home and Gateway traveled to Palmer to take on the Pathfinder Pioneers. Results were not reported to the Westfield News. 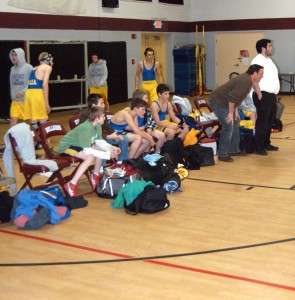 Gateway Regional High School wrestlers and the coaching staff cheer on a Gator at Pathfinder. (Photo by Chris Putz) 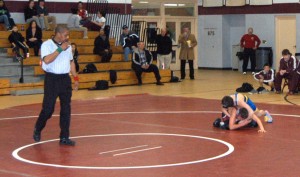