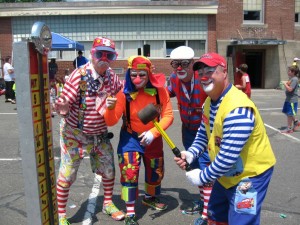 Craig “Doc” Kazin, and other Melha clowns, will perform in an upcoming fundraiser at The Cove in Southwick. (Submitted photo)

SOUTHWICK – Southwick’s Wendy Hart knew months ago, long before the pieces fell into place, that she wanted to put something together to benefit her community.
Now the pieces are in place and her community is ready for a good time.
Hart is organizing the 1st Annual ‘Clowning Around For Shriners Hospital”, a fundraiser for the Springfield institution that will be held on Sunday, August 17, at The Cove Banquet Facility on Point Grove Road in Southwick from 10 a.m. to 5 p.m.
Admission to the event is free, and there will be an appearance by the Melha Clowns, 35 vendors of all types, music, and activities for the kids, including a mobile arcade, dunk tank, raffle, photo booth and more.
“I figured what better way to help the community and the Shriners Hospital than by organizing an event that raises fund for a great organization,” said Hart, who works as a consultant for a direct sales company. “I met some of the (Melha) clowns at the Springfield Camping Show back in February.”
Hart caught the bug for organizing when she participated in a Relay for Life event in Southwick.
“I got home that night and thought ‘there’s so many different ways to raise money for people, especially for charities, why not do something for a local hospital?'” she said, adding the timeline which she has been working with has been short. “The middle or end of May I started doing this. I’ve put all this together within less than four months.”
Hart said that she has had her vendors onboard for awhile now, and now that a venue has been selected, the show can get on the road.
“I just can’t believe all of this is falling into place,” she said. “Everybody I’ve spoken to is really excited. I have the event on Facebook. I keep people up to date as to whats going on.”
“It’s going to be fun for the whole family, from two years old up to 90 years old,” she said.
Craig Kazin, past chief and current treasurer for the Shriners Melha Clown Unit, said that he has been impressed with the effort put forth by Hart in organizing the event.
“Wendy is just a gem. She went above and beyond by approaching Tampa where the Shriners Hospital for Children is located, and got permission to use their names and likenesses in the promotion,” he said. “The quid pro quo for that is that 100 percent of whatever she raises is going to Shriners Hospital in Springfield.”
“I don’t think there’s an expectation. I’d say that every dollar that comes in is a good dollar,” he said. “It all goes toward an awesome cause, and the Shriners are dedicated to making sure that people are aware of the services that are provided at Shriners Hospital. The idea that there’s an organization that would provide care like this without regard to a person’s ability to pay is very special to us.”
For further information on the August 17 event, call Wendy Hart at (413) 314-5909.