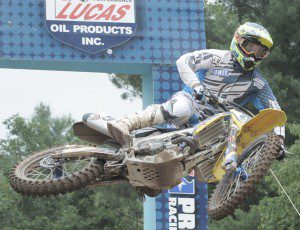 A motocross racer flies past the finish line during a practice at the Southwick MX338 track yesterday. (Photo by Frederick Gore)

SOUTHWICK – Due to age and financial burdens, Dianne and Ralph Pitello, the husband and wife institution who have run the Motocross 338 and promoted racing there for more than 30 years, will be riding off into the sunset following this summer season – although they may never be able to get racing out of their systems completely.
“We’d love to help someday in some way if we’re asked (by a new promoter),” said Ralph Pitello, sweat already drenching his orange polo in the mid-afternoon heat at “The Sandbox” yesterday.
For the time being, this year’s event is primed to be far from a teary-eyed affair, as the sport’s regional stars and national phenoms alike descended upon Legion Road for it’s media day yesterday.
With a crowd of between fifteen and sixteen-thousand spectators expected for the weekend’s main event, the Pitellos are hoping to show the brass at the American Motorcycle Association that New England, western Massachusetts specifically, is still a hotbed of interest for this growing sport, despite the forthcoming discontinuation of the region’s marquee event at “The Fenway Park of Motocross”.
“It’s unfortunate to see it close,” said Nick McCabe, a commercial developer for MX Sports Inc., the company responsible for managing and producing the National Championship race series for the AMA. “It held it’s first national race here in 1976, and hasn’t missed a year since. It’s one of our most prestigious events.” 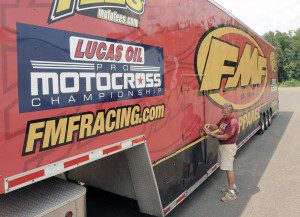 Ron Hawk, of Grove City, Penn., secures a trailer full of custom racing T-shirts that will be on display for the Lucas Oil Pro Motocross Championship race at the Southwick Motocross 338 tomorrow. Hawk said his company will have nine additional tractor trailers and 13 smaller box trucks filled with various motorcycle merchandise. Exhibitors started to arrive in Southwick this week for tomorrow’s race. (Photo by Frederick Gore)

Asked what would be needed to continue to host a national championship race in Southwick, McCabe’s concern is related to the “who” rather than the “how”.
“A race of this magnitude is not for a beginning promoter,” he said. “You wouldn’t hand the keys to a Porsche over to a sixteen-year-old. We would need a promoter of the caliber of a Ralph and Dianne Pitello, and those are tough to come by.”
Other tracks have sprung up around the Bay State as a result of Southwick’s popularity, including a facility in Templeton, which is run by the family of racing star Robby Marshall of Stow. Marshall was on hand yesterday and McCabe is confident that New England is still fertile ground for motocross to till.
“We want to keep a championship race in New England, no question,” he said, as Marshall and the rest of competitors set to race tomorrow revved it up at the start line for the traditional press day practice run.
Additional subplots that will key spectator’s interest this weekend will be both the final Southwick appearance for a legendary local racer, and the second pro outing for a youngster being touted as the sport’s new “it” kid.
John Dowd, a local racing luminary from Chicopee, retired from the professional circuit in 2005, but has competed on and off in smaller regional events over the past few years.
Known in racing circles as “The Junkyard Dog”, the 47-year old Dowd began his career at the age of 20, late by racing standards, turning pro the next year, and embarking on a career filled with highlights, many of which came on the very course he’ll be tearing up for the last time on Saturday.
Most notable of those highlights was a triumphant win in the Lucas Oil Pro Championship in 1998, in which Dowd, then 33, became the oldest racer to ever win an AMA National, upsetting nineteen year-old Ricky Carmichael of Clearwater, Florida, who was coming off a dominant season the year before, and is widely considered today to be the greatest motocross rider to compete in the sport’s history. 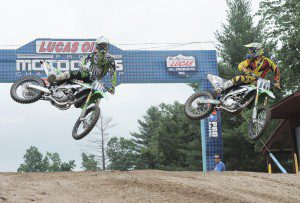 Professional motocross racer John Dowd, right, of Chicopee, watches his son Ryan, left, 16, during a practice run at the Southwick MX338 track yesterday. Racers from around the world are arriving in Southwick for tomorrow’s Lucas Oil Pro MotoCross National. (Photo by Frederick Gore)

Asked what the loss of the event means to him, Dowd smiled and shook his head.
“I was here for the first national race in ’87,” he said. “It’s a real special place, and a real bummer to see it go.”
Dowd will also be joined on the course tomorrow by his son, Ryan, 16, who is looking to qualify for the first time as a pro.
While he himself will be competing in different moto class, Ryan’s dad is excited about the opportunity to share this special place with one of the most special people in his life on it’s final running.
“This track has been here as long as I’ve been in racing. It’s going to be kind of neat to be here (with Ryan competing), but it’ll be a hectic day,” the old man said with a chuckle. “I hope he makes it.”
Ryan Dowd isn’t the only 16-year-old set to kick up some dust tomorrow, as Adam Cianciarulo is also vying to not only qualify, but win the fabled event in his first and, barring future developments, last time playing in “The Sandbox”.
Hailing from Port Orange, a suburb of Daytona Beach, Florida, Cianciarulo grew up a stone’s throw from a city whose name is synonymous with motorsports, home to the National Association for Stock Car and Auto Racing’s (NASCAR) famed Daytona 500.
Despite growing up near the bright lights of NASCAR’s signature event, Cianciarulo is equally gung-ho about descending into Southwick’s sandpit.
“I’ve never been this far north, so being here, it’s awesome,” said Cianciarulo, who now resides in California.
Following his pro debut in Budds Creek, Maryland last week, Cianciarulo, whose verified Twitter account has over 40,000 followers, and who is well aware of the course’s history.
“I remember hearing about this course, and then watching it on TV as a little kid. The hype is great,” said the prodigy, already speaking with the lingo of a seasoned pro. “It’s going to be awesome.”
With racers Ryan Villopoto and Ryan Dungey currently separated for the lead by only sixteen points in the Lucas Oil Pro Series with six races to go, the swan song for Southwick’s fabled sand course may weigh heavily on the outcome of this summer’s season.
It would be a fitting end to an exciting chapter in the lore of “America’s Fastest Sandbox” in Southwick.