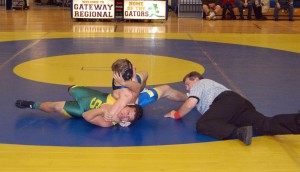 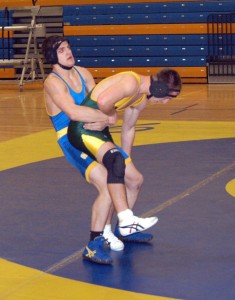 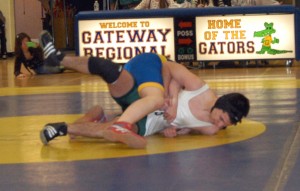 Gators’ freshman Kyle Besette, from behind, tries to get the upper hand on Southwick’s Ed Morelli last night in the Gator Pit. (Photo by Chris Putz)

HUNTINGTON – Step foot in any gym with the score favoring the visitor 36-30, you’d likely find the home team leaving the court dejected, heads hung low. But this isn’t just anybody’s backyard game.
Gateway won five of six matches – the remainder were won by forfeit – as Southwick left the Gator Pit with a victory Wednesday night.
Justin Senby (126 pounds), Nick Cerveny (138), Andrew Goszkowicz (145), Sam Rexer (152), and Kyle Bessette (160) all won by pin for Gateway. Cerveny had the team’s quickest pin, 27 seconds.
But it was Southwick’s 113-pounder, Steve Thibault, who had the event’s quickest pin 20 seconds into his match.
“We’re a young team,” said Southwick coach Ed Martinez, whose Rams’ varsity squad features more seventh- and eighth-graders than ever before. “We need to learn how to wrestle tough.”
Gateway coach Nick Langone said: “It was the perfect example of two squads having to wrestle with young guys. …I’m a traditionalist. I would like to see 10 weight classes wrestling. But it is what it is. Guys you do have, you hope show up.”
Langone said, while there are typically seven wrestlers in the lineup on any given night for his team, he especially appreciates the job that junior captain Sam Rexer has done early on.
Rexer placed second in a recent Longmeadow High tournament. He pinned Southwick’s Kyle Manley in 3:32 last night.
Langone also said Goszkowicz was a pleasant surprise, returning from offseason knee surgery to record a pin in his first match back Wednesday at home.
“The sky’s the limit for him,” Langone said.