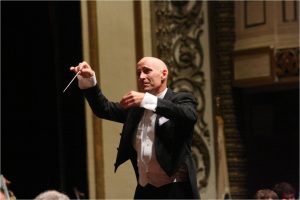 SPRINGFIELD – An evening with the Springfield Symphony Orchestra (SSO) is more than a musically memorable experience. To attend an SSO concert is to be part of a cultural tradition—one of Springfield’s richest and proudest.

Single tickets and subscriptions, including the SSO’s new Pops-oriented Wild Card 4 package, are on sale now for the SSO’s 74th season. The public may purchase tickets by visiting the box office at 1441 Main Street (ground-floor level in the TD Bank Building) or calling 413-733-2291. Opening on October 14, 2017, and running through May 19, 2018, the orchestra’s 2017 – 2018 Concert Series is sure to delight concert-goers of every age and musical preference.

“We are really looking forward to this season’s lineup,” said SSO’s longtime music director and conductor, Kevin Rhodes. “The musicians can’t wait to perform some of the greatest classical and popular pieces of all time, and we’re thrilled to welcome some incredibly talented guests to our stage. In this series, there is truly not a performance to be missed.”

In addition to offering its traditional subscriber options, which include four to all seven of its exceptional classical performances, the SSO has introduced the new Wild Card 4 package. Perfect for fans of the Pops, the new subscription package includes all three special events—Holiday Extravaganza with the Grinch, Star Wars & Star Trek Sci-Fi Spectacular and The Texas Tenors—as well as one classical performance of the subscriber’s choice.

“The Wild Card offers local music lovers the best of all worlds,” Rhodes said. “Not only will they get to attend all three of our amazing Pops concerts, but they’ll get a taste of the classical genre, and all of it at special subscription pricing.”

For their Opening Night concert on October 14, Rhodes and the SSO will present selected works of celebrated composers Rossini, Prokofiev and Brahms, featuring guest pianist Claire Huangci. Next up, on November 4, guest cellist Julian Schwarz joins the musicians for Viva America, a toe-tapping nod to the American Masters: Gershwin, Copeland, Bernstein and Liebermann. Then, on December 9, the Springfield Symphony Chorus joins the orchestra for the much-anticipated Holiday Extravaganza. Both this festive show and Star Wars & Star Trek Sci-Fi Spectacular, the season’s second special event (March 3, 2018), feature interactive family fun.

For the season’s third and final special event on April 21, 2018, the SSO is pleased to bring audiences The Texas Tenors, a wildly popular vocal trio whose signature crossover style has topped Billboard charts. The group’s widely viewed debut on NBC’s America’s Got Talent quickly led to a worldwide concert tour and a 2014 PBS special, You Should Dream, which earned three Emmy Awards.

Free parking at three downtown garages is available to all attending an SSO concert. Subscribers, whether they choose a classical package or the Wild Card 4, enjoy additional benefits, including savings of up to 20% over single-ticket purchases and exclusive access to special events. An SSO subscription makes an ideal holiday gift for friends and family members of all ages.

For more information on SSO subscriptions, single ticket sales or the 2017 – 2018 Concert Series, call the SSO box office at 413-733-2291 or visit SpringfieldSymphony.org.