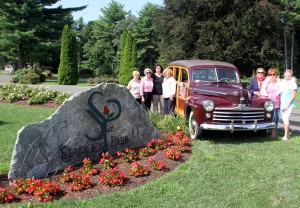 Several members of this year’s fundraising event, “Park Yourself in the 50s” committee gather at the Stanley Park’s “Welcome Circle”. They ask for you to join them for a night of remembrance of the 1st decade of Stanley Park. (Photo submitted)

WESTFIELD – For some residents of the Whip City, the 1950s were the most glorious decade of their lifetimes, spent watching The Honeymooners, wearing poodle skirts, or maybe working as a soda jerk at the drugstore downtown.
It was also the first decade of existence for Westfield’s Stanley Park.
Park supporters will soon be able to relive those happy days later this month, as Stanley Park of Westfield will be presenting “Park Yourself in the 50s” on Saturday, August 23, at 5:30 p.m.
A night of “Rockin’ and Boppin’” is planned at the East Mountain Country Club on 1458 East Mountain Road in Westfield. A dinner and both silent and live auctions will be going on that evening, along with several 50s stars who will be on hand to entertain, as acts devoted to the late Elvis Presley, Buddy Holly, and the Forever 50s Singers will be performing, as well as a fun time with Lucy & Ricky Ricardo, and a few more surprises.
“Last year we drew a couple hundred people for the event,” said Lori Fiske, office administrator for Stanley Park and member of the event committee. “It’s our annual fundraiser and it brings in a wide variety of people. Not a lot of teens or twenty-somethings, but a lot of couples.”
“We’re a private park that is neither state nor city funded, so this event is big for keeping us going,” she said.
“I think this is our sixth year, and we had two formal ones before that. Last year we did ‘Wild, Wild, Westfield,'” said Bob McKean, managing director for Stanley Park, who was born only a few months after the park was built in August, 1949. “Last year, we earned about $35,000, but people said it was too cold. The year before that, people said it was too warm. So we’re holding it inside this year, which is conducive to some of the shows we’ll have.”
McKean is excited for the event, which will commemorate a decade he experienced but enjoys reliving.
“Growing up in it, you didn’t realize just how much was going on, how much happened in the 1950s,” he said. “Things that were invented, things we don’t even use anymore. We just want to relive the 50s and celebrate the first decade of the park.”
The cost for the event is $75 per person (a portion of the fee may be tax deductible) and will help support Stanley Park. Seating is limited so please call Stanley Park to reserve your spot at 413-568-9312 ext. 111, Lori at ext.100 or visit [email protected].