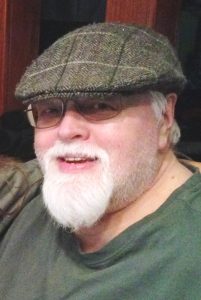 passed away on Sunday, September 24, 2017 at home surrounded by his loving family. Stephen was born in Hackensack, NJ to Clyde and Carol (Rivor) Gage. Stephen graduated from Westfield High School in 1972 and despite not furthering his education he had the gift for gab and a wealth of knowledge he shared with everyone. He was employed as a draftsman and bookkeeper for Holyoke News for many years. Stephen had a passion for music, collecting records and favoring The Beatles. He was a collector of many things, loved to be on his computer and he was a “Trekkie” at heart. Stephen was known for his “Santa” like appearance, he played Santa at the Westfield Boys and Girls Club, for the Girl Scouts and for local nursing homes. Stephen is survived by his beloved wife of 30 years, Pamela A. (Tyminski) Gage, his son Jonathan D. Aspinall with Sharon Poehlman, his daughter Pamela S. Rivera and her husband Edward, all of Westfield, his two cherished grandchildren, Timothy Rivera-Melendez and Makayla Rivera, his parents Clyde and Carol Gage and his sister Lorraine Gage, all of Arizona, his “children” Shastity Ortiz and Felicia Ortiz and many family and friends. Stephen’s family would like to thank Dr. Timothy Johnson and his staff and the Baystate Visiting Nurse and Hospice staff, for the loving care and support given to him and his family. There are no services. Arrangements are under the direction of Firtion Adams FS, 76 Broad S. Westfield, MA 01085.