The sub-committee’s task on Monday was to have a discussion on the hot-button topic of the artificial turf at the Roots Athletic Facility on Root Road.

The artificial turf being used contains infill that is made from recycled tires known as crumb rubber. This infill has been a concern to residents that it could potentially be a threat to the Barnes Aquifer as well as private wells that residents use that live near Roots Athletics Center.

In a report by the Westfield News on March 23, during the Board of Health meeting on Wednesday March 22nd several residents in Westfield voiced their concerns over the use of crumb rubber on the playing surface.

In the article from March 23, the owners of Yellow Stonehouse Farm were concerned that their organic crops could be harmed by the chemicals from the crumb rubber if it happens to get into their private well. 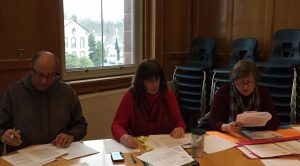 The Natural Resources sub-committee talks about the concerns about the crumb rubber. (Photo by Greg Fitzpatrick)

Councilor Babinski stressed the importance of the private wells, but also included the harm it could have on the Barnes Aquifer.

“We need to see what potential impacts this could have on our aquifer because we’re already facing a contamination,” said Babinski.

The sub-committee also talked about the fact that the neighboring towns and cities that also use the Barnes Aquifer, have voiced their concerns to Westfield city officials. The town of Southampton sent a letter to the Westfield Planning Board recently that the contamination of the crumb rubber could get to their part of the aquifer or to their own private wells. Easthampton and Holyoke are the other communities that Westfield shares the Barnes Aquifer with.

The concerns weren’t just about the crumb rubber leeching into the city’s water sources as some voiced that the chemical could have a negative health effect on the participants from the youth soccer teams that use the artificial fields at Roots Athletics Center.

Chris Pinney, who is a soccer coach for an under-eight-year’s old girls team, expressed his thoughts on the potential dangers of crumb rubber.

All of the concerns that residents, parents, and city officials have on this situation, will be continued. The sub-committee agreed to make a motion to keep the discussion in the committee for the next meeting which will take place on April 10.