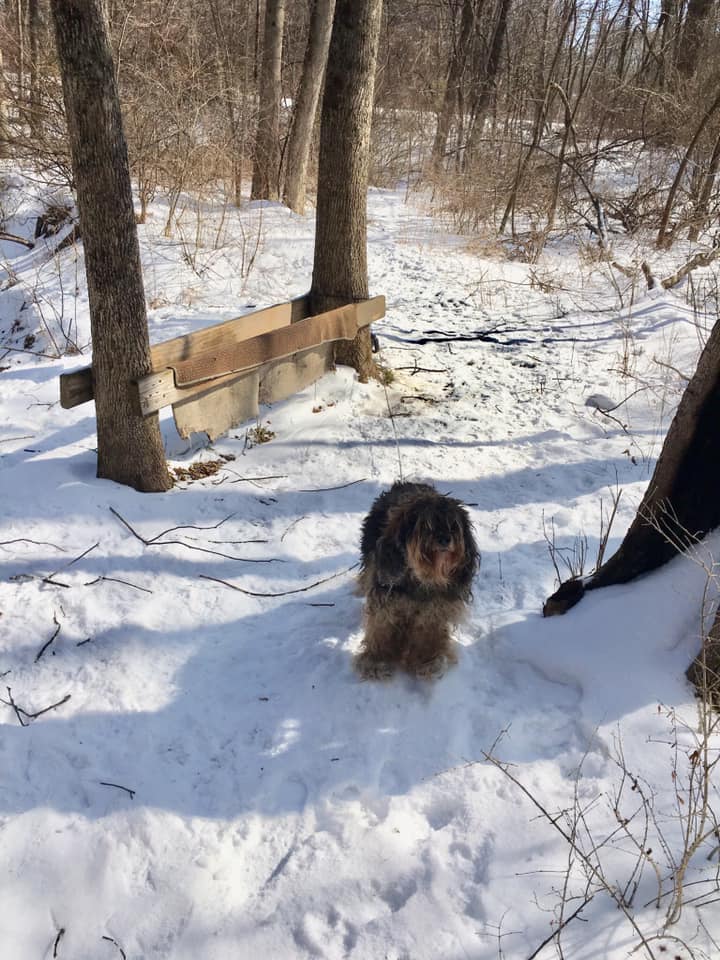 SUFFIELD – The Suffield Police Department is looking for help the of citizens from surrounding communities after a dog was abandoned at a park in Suffield.

Reported by the Suffield Police Department, a person walking in Stony Brook Park on February 28 at around 12:30 p.m. discovered a dog tied to a tree abandoned. A small terrier, the dog was not only tied to a tree by its leash, but also had the leashed wrapped tightly around one of its legs. Once the Suffield Animal Control Officer arrived on scene, it was also discovered that the dog has severe matting on the fur, missing parts of fur from the dog’s tail, and a tumor on one of the dog’s rear legs. Icicles were also hanging from the terrier’s fur. Animal control then transported the canine to a local animal hospital to be evaluated and receive medical care. 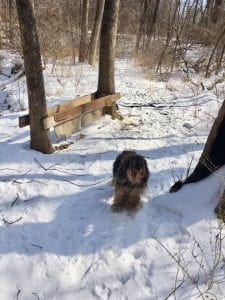 Brooks is seen tied by his leash to a tree at Stony Brook Park in Suffield when animal control arrived on scene. (Photo from Suffield Animal Control)

It was determined that the dog was most likely abandoned to the tree for about one day and throughout the night. Being named “Brooks” by the Suffield Animal Control, the terrier has been recovering at River Valley Animal Center in Suffield and has been cleaned and groomed up.

“You look at him, and it’s like a whole new dog,” said Suffield Police Captain Christopher McKee. “He’s kind of become the king of the hospital over there (River Valley Animal Center).”

McKee added that Brooks will be put up for public adoption in the next few weeks, which will be posted on the Suffield Animal Control page. The Friends of the Suffield Animal Control, which is made up of all volunteers, has created a GoFund Me page to cover any medical costs for Brooks. Currently, the town is paying for those costs, but the GoFund Me page has raised over $16,000 from donations.

While people continue to make donations towards medical expenses for Brooks, McKee and the rest of the Suffield Police Department is actively investigating the incident and trying to find out who’s responsible for abandoning the dog.

“Please look at the pictures because we need leads,” said McKee. “Somebody saw something, somebody knows this dog, and that’s why it’s so huge for us to get it out to the media.”

According to McKee, the investigation so far indicates that the dog was abandoned by someone. 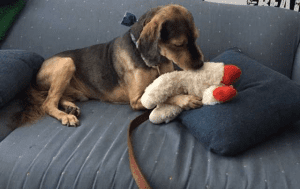 Brooks is seen in good spirits after being abandoned at Stony Brook Park and found on February 28. (Photo from Suffield Police Department)

“Just because we identify someone doesn’t necessarily mean there will be an arrest, but we need to get to the bottom of it,” said McKee. “If it appears to be the crime it is, then someone needs to be held accountable for that.”

If Suffield Police happens to find the person or people responsible for this act, they could face a charge of cruelty to animals. Due to the manner that Brooks was left and the injuries he suffered, McKee added that the crime would also rise to a felony with the possibility of jail time.

The Suffield Police Department also wants to make people aware that if someone gives them information that leads to an arrest, they will receive reward money. The amount of that money is not being revealed.

With Stony Brook Park being on Route 75, a very well-traveled road that goes from Agawam to past Bradley Airport in Windsor Locks, Suffield Police is hoping that someone driving by saw something. McKee noted that he’s notified surrounding police departments like Southwick, Westfield, and others to make them aware in hopes that someone knows some information.

If you have any information about this incident, you’re being asked to contact the Suffield Animal Control at 860-668-3870.