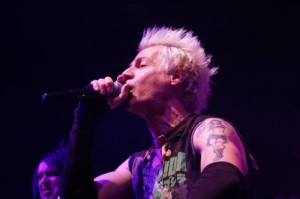 HARTFORD, Conn. – Billed as The Summer Meltdown, The Webster Theater in Hartford welcomed a full slate of heavy metal last Friday night. The day started with a second stage at 3 p.m. and ended with a headline performance of robotic rawkers Powerman 5000 around midnight. This was truly a full day of metal and enough to satisfy even the biggest of fans.
The main stage kicked off with a short but rawking set by The Relapse Symphony. Touring in support of their first releases, Shadows, TRS played like they were in front of a stadium crowd. This is a high-energy band that has some really catchy riffs and some great stage presence. They also played a great cover of The Ramones’ Blitzkrieg Bop. These guys mesh heavy metal, punk and rawk for a combination that really works. They are definitely worth checking out as they seem to be coming out of the shadows.
Shock-rawkers, Sunflower Dead followed TRS with a very interesting set. Musically this band has some very well-crafted songs. Visually, well that is another story. Their set opened with lead singer Michael Del Pizzo walking out with a maniacal smile on his face and playing some creepy notes on his accordion. Face painted white with black veins around his head, Del Pizzo dropped the accordion as the rest of the band joined him on stage. All band members were sporting some type of face paint that showed a different form of craziness for each. Touring in support of their 2012 release, the band’s set included songs off of that release. They also included a very cool and heavy version of The Police’s Every Breath You Take. This is another band to keep an eye out for, as I assume the bigger they get, the better the show will be both visually and musically. 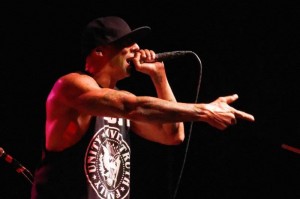 “These ladies rawk!” That is what I thought to myself as Eyes Set to Kill took the stage and kicked some serious musical butt. Sisters Alexia and Anissa Rodriguez started the band in 2003. Hailing from Phoenix, Arizona, they have been gaining popularity and critical acclaim ever since. Still touring in support of their September 2013 release Masks, ESTK have the live thing down pat. They are a very well-oiled machine that just gets on stage and rawks. A little short (30 minutes) but great set this time and I would not even consider missing them when they come back around.
(Hed) PE took the stage with lead singer Jared Gomes in full camouflage from head to toe, including his face. He sang the entire first song covered in this gear, needless to say an interesting way to start the show. Nine records and 20 years later, these guys are sounding stronger and better than ever. Their latest release, Evolution, may even be their best. A solid release and killer opening track, No Turning Back, it was also the band’s first song of the set. (Hed) PE crammed as many songs as they could in the 40-minute set and included a couple of songs off their latest. As the set wore on the sound was getting a little muddy. The set was supposed to be an hour and not sure if it was cut short because of the sound or the lack of crowd. Either way this band still has the energy as when they started and always put on a great live show. Check out the new release – well worth your time.
Powerman 5000 ended the night with a 15-song 60-minute set that that was played in true Powerman fashion. With a mix of electronic sounds and heavy metal music, PM5K have stuck with their signature sound and are back making some big noise in the music world. Touring in support of their latest release, Builders of the Future, PM5K showed why they are headlining this tour. Their set included a mix of classics and newer material including Super Villain, How to Be a Human, We Want it All, An Eye is Upon You and Supernova Goes Pop. They saved the best for last as they played Tonight the Stars Revolt! and When Worlds Collide both off the 1999 release Tonight the Stars Revolt! This was a really good set and is great to see these guys back in action.
Mike Augusti’s Rawk Report provides live reviews of local concerts in Connecticut and Massachusetts. The Rawk Report also includes new music releases and upcoming concerts to the area. Please contact Mike at [email protected] for any questions or comments.